You are here:Home / Products / Macabido® 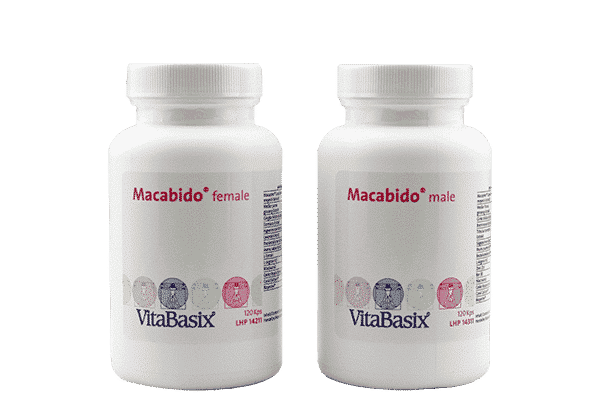 Purely vegetable substances to increase energy and libido. The combination of active ingredients optimally tailored to the requirements of men and women increases sexual stamina and performance and improves the well-being. Successfully fights listlessness, fatigue and general physical exhaustion.

Stress, harmful effects of the environment, hormonal changes, taking of medication, diseases, age. All these factors lead to a decrease in sexual desire and performance in men and women. Like all hormones in the human body, also the sexual hormones of men and women are characterized by a substantial decrease in production starting in mid-life. False nutrition but also disturbed sleep and stress are factors that enhance this natural course. According to a recent poll, almost six out of ten women and five out of ten men – i. e. every second woman and man – suffer from one or more sexual dysfunctions, or are simply not satisfied with their sex life at some point in their life. But even in confidential talks with their physician, sexuality remains a taboo subject for many people.

Sexual dysfunctions were already a subject of great interest to researchers thousands of years ago. They looked for help in the treasure trove of nature, and found it. The Incas in South America, for instance, discovered active ingredients to increase sexual energy, stamina and desire in the extract of the sweet potato maca.

Extensive studies of the 2000 year old medical knowledge concerning maca inspired researchers to investigate combinations with other medicines to strengthen libido. The end product of this development is Macabido®. The patented active ingre­dient Macaplex® with its numerous minerals, essential amino acids, trace elements, vitamins and further substances at maximum levels of concentration and purity were supplemented by other substances that act on a sex-specific basis such as ginseng, ginkgo biloba, royal jelly or the herbal aphrodisiac damiana. The result of the scientific work is that Macabido® not only contains maca (lepidium meyenii) in various forms but also specific medicinal plants or minerals with a broad range of action particularly for the female or the male organism.

In addition to a sexual stimulation, Macabido® enhances mental and physical energy, stamina as well as the activity of the immune system. The unique, scientifically adapted and patented composition of active ingredients in Macabido® is tailored to the specific needs of men and women in the formulas «female» and «male». The most favorable changes registered in the field of sexuality were: persistent strengthening of the libido of men and women, increase of the general sexual stamina and performance, improvement of erection, balancing of irregularities of the cycle and alleviation of climacteric complaints. Scientists have reported heightened desire as well as well as increased general well-being. In a poll, almost 90 percent confirmed a significant improvement after only four weeks.

Ginseng: a root that has been used in China for thousands of years already to improve the immune system, vitality, sexual desire and mental performance.

Royal jelly: the food of the queen bee has particular effects on glands and hormonal fluctuations. It influences sexual energy, strengthens metabolic activity and the immune system.

Niacinamide: niacin (vitamin B3) enhances, among other things, the endogenous production of sexual hormones. Widens the blood vessels and increases the blood supply.

Coral Calcium®: regulates the pH-value of the organism. The more balanced this value, the better the organism’s ability to absorb all other active ingredients.

Damiana: long-known and proven aphro­disiac for the woman, originates from Mexico. Strengthens the circulatory system, reactivates sexual desire, improves the functioning of the urinary tract.

Ginger: has a stimulating and warming effect, acts bactericidal and as an aphro­disiac.

Avena sativa: this extract, which is won from green oats, has been successfully used as an energy tonic for many years. Stimulates the endogenous hormone production in a natural way.

L-tyrosine: this amino acid helps to reduce stress and tension and reduces, in particular during menopause, irritability, depression and fatigue.

Passion flower: has a relaxing and calming effect on the nervous system.

L-arginine: is the most potent of all amino acids which increase the sexual desire. Enhances the production of sperm and induces erection.

Saw palmetto: is known for its positive effect on the prostate in naturopathy. Improves the sexual functions and acts as an aphrodisiac.

Zinc: zinc deficiency is often the cause of prostate problems. Strengthens the immune system and improves ejaculation.

White panax ginseng: A native of Asia true ginseng is used as a medicinal plant for many centuries. White ginseng is made by drying the roots and then grinding them into powder. Strengthens the immune system and improves mental functions, promotes sexual desire, vitality and male potency.