Much has been researched and written about the curative properties of turmeric. New studies on turmeric and diabetes suggest that this tasty spice may offer new hope for an all-too-common disease.

Turmeric is gaining popularity, both as a spice and as a natural remedy. Not only is this exotic spice an important part of popular foreign cuisines such as East Indian food, but it also is being suggested as a natural remedy that can benefit a variety of serious conditions in several new studies. An increasing body of new research on the link between turmeric and diabetes suggests that this bold spice may also help protect against diabetes and may even soothe some symptoms of this common concern.

Many people have heard of turmeric but few have heard of curcumin. Curcumin is the compound in turmeric root that gives it its distinctive color and flavor. In lab tests, curcumin has been found to protect against inflammation, slow the growth of tumors and otherwise promote good health. According to new studies, curcumin in turmeric root can offer a number of benefits in relation to diabetes, including reducing complications and even helping to protect against this common metabolic condition. This makes sense in light of other recent studies finding that diabetes can be at least partially attributed to inflammation in the endocrine system.

The Link Between Turmeric and Diabetes Prevention 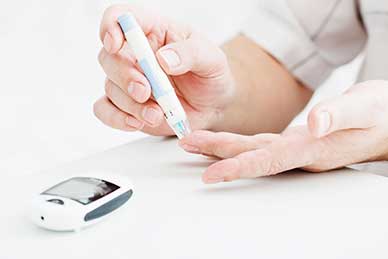 According to new research, consuming turmeric may act as a powerful preventative measure for diabetes. People who were at risk for diabetes were placed on a turmeric supplement and had their hemoglobin A1c as well as inflammation markers tested at regular intervals. Hemoglobin A1c is a popular measurement that tells doctors how high a person’s blood glucose has been on average for the past three months.

Taking a turmeric supplement led to a quick decrease in hemoglobin A1c and blood glucose. It also led to lower levels of inflammatory markers and less insulin resistance than a placebo. While this effect may not be enough to cure diabetes once the disease process has begun, it very well may help to prevent the disease. In addition, turmeric appears to reduce the immune response in people with type 1 diabetes, which can lessen the severity and extent of the disease immensely.

In addition, curcumin and turmeric can be used to prevent the complications of diabetes once the disease has been diagnosed. People with diabetes often suffer from end organ damage such as peripheral neuropathy, kidney disease, cataracts and even progressive cognitive decline. While these processes can be slowed down by controlling blood glucose, they often cannot be stopped entirely. However, turmeric appears to slow the development of these diseases even further. Turmeric appears to have a huge effect on the damage to blood vessels and organs that be caused by high blood sugar.

Can Diabetes Be Treated Naturally?

Although there are several popular medications to treat diabetes, it often can be managed naturally. Many people find that diet and exercise both help to keep both sugar levels low. In addition, you can try any one of the following:

Getting More Turmeric in Your Diet 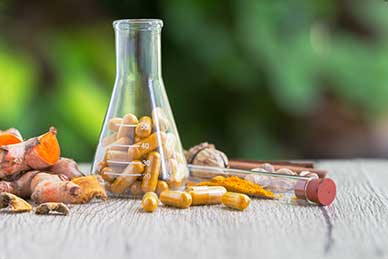 Turmeric has been found not to just be helpful for diabetes, but for a wide range of inflammatory disorders. These can include joint disease, heart disease and more. People around the world eat turmeric in larger quantities than in the United States, which may be part of the reason that we have such high rates of autoimmune and inflammatory illness. If you are trying to get more turmeric, consider eating more yellow curries and East Indian food. These contain plenty of turmeric, enough to have a positive effect on your life.

If you are not a fan of curry, there are other ways to get the health benefits of this spice. There are many capsules on the market that offer turmeric in a form that does not require a taste for hot foods. It is important to start with a very small dose and then to gradually work up to a higher one. This will allow you to have fewer side effects such as stomach upset. Also, it is important to talk to a doctor before beginning this or any new supplement. Even natural medications have drug interactions and contraindications to be considered.

Diabetes is becoming a health crisis in the Western world, with millions of Americans struggling to manage their blood sugar due to this devastating disease. However, there are many proven ways to prevent and treat this disease naturally. Consider taking turmeric and other natural supplements to get your blood sugar under control once and for all.