Coffee is an obsession in the Western world. While many people enjoy this energizing beverage, many of us also view it as a bad habit, even if a minor one. However, a new chronobiology study on coffee and the circadian rhythm has found that moderate amounts of coffee affect the circadian rhythm in positive ways, and may be especially good when it comes to regulating your sleep-wake cycle.

How Coffee Affects the Circadian Rhythm: Turning Back the Clock

In a human study, four groups of people were subjected to one of four treatments shortly before going to bed. The first group was exposed to bright light and given a double-espresso strength dose of caffeine. The second group was exposed to dim light and given a double-espresso dose of caffeine. The two other groups were both exposed to bright or dim light but were given a placebo pill. The result? Not only did the caffeine keep participants awake at night, but it completely shifted their circadian rhythm so they produced sleep hormones and fell asleep an average of 40 minutes later—nearly half the magnitude of delay caused by bright light. In short, coffee appears to delay the circadian clock by about 40 minutes, about half as long as does exposure to bright light.

When human cells in Petri dishes were treated with caffeine, the same effect was observed. Researchers found that coffee affects the circadian rhythm in human cells in-vitro by activating adenosine receptors, which are important regulators of internal clocks. In effect, the clocks were held back.

This is not the first study that has found coffee can have powerful effects on internal clocks and metabolism. In prior research, mice were exposed to caffeine. Half of the mice were allowed to eat whenever they wanted while half had restricted feeding times. It was shown that caffeine restricted the gene expression and thus production of inflammatory factors and metabolic markers associated with cancer in the intestines of both groups. In the group allowed to eat freely, it also restricted these factors in the liver. Interestingly, coffee affects the circadian rhythm of different cells in different ways.

A Cure for Jet Lag? 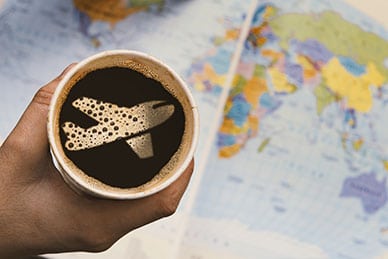 What does this mean for human health? First, caffeine may be used in the future to modify the activity of circadian clocks. This could help in the treatment of jet lag, non-24 hour circadian rhythm disorders and several other sleep disorders. However, caffeine alone appears to have less effect on the liver and possibly other organs with their own internal clock mechanisms. In essence, we may be able to use our new knowledge about how caffeine affects the circadian rhythm to cure jet lag in the brain, but jet lag in the liver will remain an issue. In other words, some organs will still remain in their own time zone.

Because caffeinated beverages are so popular in the United States, it is important to understand how coffee affects the circadian rhythm and other aspects of health. It appears that caffeine can be extremely beneficial in people who need to modify their internal clocks slightly, but that it could have unwanted effects in others who drink it before bed. In short, if you are looking for a warm beverage to enjoy after dinner, unless you’re trying to adjust your circadian rhythms, you may want to reach for the herbal tea.