Many people all over the world take melatonin to help them sleep. However, new research suggests that some may benefit from taking melatonin for anxiety as well.

Around one in five adults suffer from anxiety. While certain types of therapy and medications such as SSRIs can help, many people struggle to manage their symptoms. The loss of daily function and lack of sleep can severely interfere with the lives of people who suffer from this concern. As a result, many people are on a search for safe, natural remedies that will help manage their anxiety and the often-associated occasional difficulty sleeping once and for all. Several new studies suggest that taking melatonin for anxiety may be the answer many have been looking for.

Deciphering the Underlying Causes of Anxiety

Scientists and doctors do not understand why some people suffer from anxiety on a daily basis while others do not. However, there is a lot that we do know about this condition thanks to a great deal of research. PET scans show that the root cause appears to be an imbalance of certain neurotransmitters such as serotonin and epinephrine. The autonomic nervous system, which controls instincts such as “fight-or-flight” behavior, also appears to play a role. People with anxiety appear to have a smaller temporal lobe volume, reduced numbers of serotonin receptors and increased blood flow in areas of the brain that mediate emotions such as fear. While people once thought that anxiety was a personal weakness, we now know that it can have very real physical causes.

The result is that people with anxiety suffer from excessive panic and fear compared to other people in similar situations. They also have a wide range of physical symptoms such as sweating, tremors, rapid heart beat, dilated pupils and insomnia. The constant presence of anxiety in one’s life can make it difficult to function normally both at work and with loved ones. Doctors currently treat anxiety with therapy as well as a range of pharmaceuticals that quiet physical symptoms and increase serotonin levels. Sedating medications are also a popular treatment as they quiet a mind and body that are on edge.

Melatonin for Anxiety: A Natural Treatment with Potential 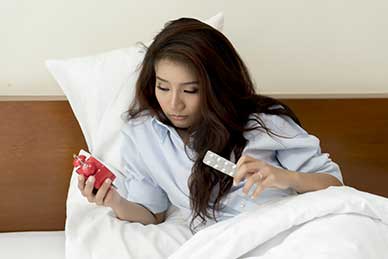 Melatonin may be a potential treatment for helping to soothe anxiety, especially anxiety that comes with occasional difficulty falling asleep and other sleep concerns. Melatonin has long been noted to decrease anxious behaviors in research animals, even as far back as 1984. Researchers noted that animals who had higher levels of melatonin showed less of the hallmark behaviors of anxiety while also performing better on tests, making fewer errors. They also slept better at night. Part of this was believed to be due to melatonin’s slightly sedating effect as well as the fact that these lab animals were getting better sleep. After all, sedatives of various kinds are already used successfully in treating anxiety. In addition, melatonin is a hormone that helps us to fall asleep at night and stay asleep, so it is no surprise that we will generally be better rested while taking a melatonin supplement.

However, more recent research suggests that melatonin may have a calming effect on people with anxiety even outside of its sleep benefits. People who take melatonin before and after surgery—times when physiological and psychological stress run high—have less anxiety and also fewer instances of postoperative delirium. This is significant because many anesthetics, such as Propofol, reduce plasma melatonin levels. This may actually be contributing to high levels of anxiety in patients undergoing surgical procedures. This is more significant when you consider that Ramelteon, a drug that increases melatonin, has already been shown to be effective in treating anxiety associated with insomnia.

Anxiety is one of the most common mental afflictions in the world, while occasional difficulty falling asleep also affects millions of people. Could these disorders be somehow linked? Scientists are still studying the connections between difficulty sleeping and anxiety, but the remedies for these two disorders remain very similar. Whether you are suffering from anxiety, occasional difficulty sleeping, or both, cognitive behavioral therapy, lifestyle modifications and increasing melatonin are promising treatments. Whether you increase melatonin levels by taking a melatonin supplement or taking a drug such as Ramelteon, you may find that you are less anxious and more able to handle the stresses of daily life without unpleasant physical symptoms.

Melatonin may help anxiety simply by sedating sufferers, increasing sleep or even by a mechanism that is not yet known. The research is clear that taking melatonin for anxiety appears to help treat many of the symptoms. It is important to talk to your physician before adding any medication or supplement to your regimen, especially if you are already being treated for anxiety or insomnia with pharmaceuticals. However, the evidence behind melatonin indicates that it may have a very beneficial effect for people with a variety of health concerns.