Almost 30 million people in the United States suffer from diabetes, a disorder of glucose metabolism. This number is growing at an alarming rate, making this one of the most studied diseases of our times. According to a new study, vitamin A plays an incredibly important role in maintaining insulin production. Could a link between vitamin A and diabetes—namely a deficiency of vitamin A—be partly to blame for growing rates of this serious disease?

There are two different kinds of diabetes, but both have to do with insulin. Insulin is a hormone that “unlocks” cells so they can take in glucose. This hormone is made by the beta cells of the pancreas in response to the body taking in glucose. Without insulin, cells begin to starve as they do without this very efficient energy source, even when it is in ample supply in the bloodstream. In addition, glucose remains in the bloodstream where it can cause damage to delicate tissues.

In Type 1 diabetes, the immune system attacks the beta cells of the pancreas so they cannot produce insulin. This is a permanent condition and the only treatment is supplementation of insulin. On the other hand, Type 2 diabetes occurs when the body gradually builds a resistance to insulin. Over time, cells stop responding to insulin for reasons we don’t entirely understand. Even when the body has high glucose levels and high insulin levels, glucose still is not taken into cells. This condition is called insulin resistance.

The Link Between Vitamin A and Diabetes

New technology has allowed scientists to look more closely at cells on a molecular level. Researchers discovered that beta cells are covered not just in glucose receptors, but in vitamin A receptors as well. When these receptors were blocked in mice, the beta cells had difficulty sensing and responding to high blood glucose levels. They then repeated the test on human cells with the same result: Blocking the vitamin A receptors impaired the ability of beta cells to release insulin in response to high blood glucose levels. When the beta cells of people with type 2 diabetes were compared to those of people without the disease, the same results were found.

What does this mean for public health? First, getting enough vitamin A is crucial to good metabolic function, particularly to good beta cell function. Second, a childhood vitamin A deficiency may actually do lifelong damage to beta cells in the pancreas, setting the child up for future metabolic problems.

The Role of Vitamin A in Metabolism

This is not the first study to link vitamin A to beta cell function. Previous studies have shown that this nutrient is extremely important to beta cell development in the fetal period. Having low levels of vitamin A may actually decrease beta cell function by as much as 30 percent, enough to have a dramatic effect on glucose levels. Because vitamin A is uniquely involved in cell differentiation, beta cells may simply need this nutrient to develop properly. However, these new studies make it clear that vitamin A deficiency can cause diabetes-like dysfunction of insulin release even in people who have had normal development.

If you are struggling with diabetes or another type of metabolic disorder, a vitamin A deficiency may be partially to blame. Other symptoms of vitamin A deficiency include dry or itchy eyes, loss of vision, poor bone growth, poor hair growth and impairment of the immune system. This vitamin is crucial not just for children who are developing, but for adults who wish to maintain a healthy body. However, many people in the United States and the Western world are deficient in this nutrient.

Getting Enough Vitamin A 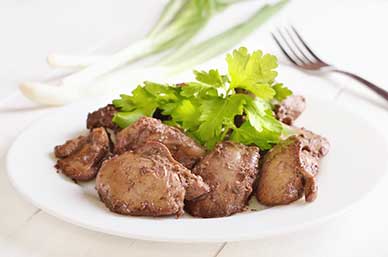 The recommended daily allowance for vitamin A is 3000 IU for adult males and 2300 IU for adult females. Some populations, such as people with diseases of the intestines, pancreas or liver may need much more than this. The foods richest in vitamin A are liver and oily fish. In addition, dairy products are fortified with vitamin A. However, there are also many plant sources. Orange or red vegetables such as carrots, orange squash, red bell peppers and tomatoes also are generous sources of this vitamin.

Despite the availability of many foods rich in vitamin A, deficiencies remain common. Oily fish and liver simply are not huge parts of most Western people’s diets. For this reason, many people benefit from taking a supplement that has their recommended daily allowance of vitamin A. This ensures that you will always have the amount of this nutrient needed to support a healthy metabolism. While vitamin A is important for insulin production and diabetes prevention, it also supports whole-body health in a variety of ways.

Getting a wide variety of vitamins and minerals is crucial to maintaining optimal health. Despite the wide availability of healthy foods, many Americans simply do not get the nutrients that they need. According to research on vitamin A and diabetes, this depleted diet may be part of the reason for our high rates of diabetes and other metabolic syndromes. If you are concerned that you have a vitamin A deficiency, it is important to find a supplement or other multivitamin that has the vitamins you need to maintain metabolic health over a lifetime.