There was a time when bacteria were seen by the medical community as unwanted invaders and causes of serious disease. While some microbes are dangerous, there are several species that we actually need for optimal health. Our skin, our gastrointestinal tract and many areas of our bodies flourish when colonized in large numbers by certain kinds of bacteria. A new study suggests that these gut bacteria influence diabetes risk and have a variety of positive effects on our metabolism.

Type 2 diabetes is a serious illness in which the body becomes resistant to insulin, the hormone needed to let glucose out of our bloodstream and into our cells. People gradually become overweight from this excess sugar even as some cells starve for energy. The excess sugar in the bloodstream can lead to cardiovascular disease, nerve damage, blindness and, over time, even cause death.

There is no cure for diabetes, although there are ways to manage it. Eating a low-carb, high-fiber diet has been found to reduce the effects of the disease. There are also several medications that can reduce blood sugar, although these often have unwanted side effects. As with all diseases, prevention is the only real cure.

Rates of type 2 diabetes are increasing steadily, becoming one of the greatest public health threats of our times. This is partially due to a less healthy diet and a lack of exercise in our population. According to a new study, a lack of beneficial gut bacteria may also be contributing.

How Can Gut Bacteria Influence Diabetes?

Researchers examined the lifestyles of several sets of twins, including their diet, exercise habits and other risk factors for metabolic disease. They also took stool samples over a long period of time to identify the different bacteria present in the participants’ GI tracts as they aged.

None of the people studied had type 2 diabetes when the study began. However, those who developed this disease had changes in gut bacteria before it was diagnosed. In particular, they had decreases in Akkermansia muciniphila, a probiotic bacteria that has been found to prevent inflammation. Although more research is needed, scientists believe that type 2 diabetes risk may actually be predicted in part by whether this and other beneficial bacteria are present in adequate numbers.

Another study found that the presence of a microbe called Prevotella Copri can contribute to the development of type 2 diabetes. This bacteria is normally not present in the gut, but may grow in colonies in the absence of other, healthier populations. Clearly it is important to our metabolic health to have flourishing bacterial populations, but only certain types of bacteria.

Your Microflora and Your Health 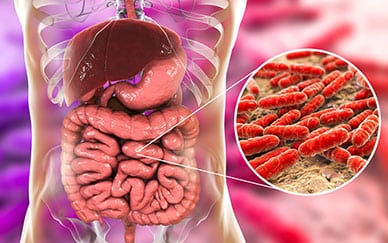 Our gut bacteria contribute to health in a variety of ways. First, they help to breakdown nutrients so they can be more easily absorbed and metabolized. Some nutrients, such as vitamin K, cannot be absorbed without the right bacterial influence. Second, our gut bacteria release different amino acids and bioactive substances that can have a huge impact on health. In particular, many of these substances can either increase or reduce inflammation. This is likely the reason that colon cancer and inflammatory bowel disease (IBD) have been linked to imbalances in our microbiome.

Having large colonies of beneficial bacteria can prevent disease-causing pathogens from flourishing. There simply are not enough nutrients and space to support negative bacteria. This is the reason that people are more prone to infections from Clostridium Difficile, or C. Diff, after being given antibiotics that kill healthy GI flora.

Clearly, having healthy GI flora is crucial to our whole body health. However, the modern diet is often lacking in the fiber and beneficial bacteria needed to sustain healthy gut bacteria populations.

There are several ways to promote healthy gut bacteria. First, consider eating foods with probiotic bacteria such as yogurt or kefir. If these foods do not appeal to you, probiotic supplements also are a great way of getting a steady intake of beneficial microbes. Second, avoid antibiotics as well as antimicrobial cleaning products unless they are needed for health reasons. These substances often kill off good bacteria, allowing disease-causing bugs to flourish.

Eating fiber also appears to be important to maintaining gut bacteria. Prior studies have found that eating fiber can reduce diabetes risk directly. We now know that this may be due to the fact that fiber helps beneficial bacteria to grow. Taking a prebiotic supplement containing soluble fiber known to support GI flora also is a good way to help sustain healthy gut bacteria.

There is no way to completely eliminate risk of disease. However, having healthy gut flora appears to reduce our risk immensely. Eating the right foods, including probiotics and the fiber needed to feed them, appears to be crucial not just to your GI tract, but to the health of your entire body.