Couldn’t most of us use an extra hour of sleep? Many people look forward to the fall time change, which occurs on November 6 this year. Unlike the spring changing of the clocks, which equates to lost sleep, turning the clocks back in the fall, or “falling back,” gives us a much-needed extra hour of slumber. It also means waking up to a little more sunshine, even if we pay for that sunshine with an earlier sunset. However, the fall time change can impact your health in a variety of negative ways.

The History of Daylight Saving Time 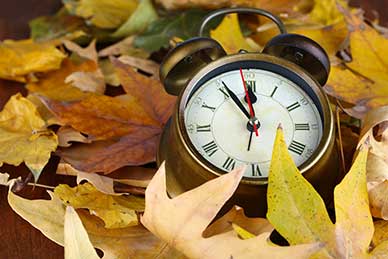 The tradition of turning the clocks back in the fall and forward in the spring began in World War II. Seasonally adjusting the clock in this way allowed people to enjoy maximum sunlight during the day, thus lowering the amount of resources used in lighting homes and businesses. Fuel was at a premium during the war, so this tactic had a measurable impact on how much fuel citizens used. When the war ended, the United States and Europe made Daylight Saving Time (DST) a local option.

Some communities continued the twice-yearly change in clocks while others did not. As the country became more mobile and well-connected, this inconsistency led to a great deal of confusion. This spurred the creation of the Uniform Time Act of 1966, which made changing clocks mandatory for the entire nation (except in the case of special exemptions). Since then, most Americans and a great deal of Europe as well changed clocks one hour forward in spring and one hour backward in the autumn.

The Effects of Time Change on Your Circadian Rhythm

Our bodies run according to a series of internal clocks known as our circadian rhythm. When our sleep-wake cycle changes suddenly, we suffer from the mixture of fatigue and clouded thinking that we call jet lag. Our bodies are suddenly out of sync with our environments and must adjust to the new time, a process that happens slowly.

In the spring, a switch to Daylight Saving Time means that many people lose an hour of sleep and must adjust to waking up significantly earlier. The effects of this change in time have been well-documented, including an increase in strokes, heart attacks and even car accidents. Until recently, much of the research on the effects of time change has centered on the spring change in clocks, as this involves losing sleep. However, it has become increasingly evident that the fall time change may also have a variety of negative effects on your health.

How Is Turning the Clocks Back Bad for Your Health?

While getting an extra hour of sleep is better than losing one, it still has an effect on the circadian rhythm. Many scientists believe that any change in the circadian rhythm can have long-term effects on health, including an increase in cancer risk. The decrease in light during the day also can have an effect on health. Children are less likely to play outside during the long dark hours of winter evenings, increasing the risk of obesity and the many other health risks associated with it. Adults are similarly less likely to go for a jog or otherwise get exercise when it’s dark out.

In addition, the decrease in light during waking hours can affect mental health, worsening mood disorders and increasing depression. Many people are affected mentally by a change in light, even among those who haven’t been diagnosed with seasonal affective disorder (SAD). We rely on light to regulate our circadian rhythms. A lack of light can throw metabolism into disarray and disrupt the internal clocks.

Healthy Ways to Deal With a Time Change

If you are concerned about how turning back the clocks affects your health, there are a few things you can do to soften the blow. Begin by slowly changing your schedule in the week before the time change, so it has a less-abrupt effect on your sleep-wake cycle. Maximize outdoor time and access to sunlight, even adding light therapy if you feel you can’t get enough sunshine. Take a melatonin supplement before bedtime if you aren’t feeling sleepy. Last, be sure to get enough exercise even if this means switching to indoor activities. Caring for your health and replacing the light stolen from your day can mitigate many of the effects of turning the clocks back.

Our circadian rhythms are essential to our health and well-being. There are many ill effects, both short-term and long-term, when we disrupt our internal clocks. However, there are ways to make Daylight Saving Time easier on our bodies and minds. Caring for your circadian rhythm is an important part of leading a healthy lifestyle.