Resveratrol, a compound most commonly know to be found in grapes and wine, has been hailed in research as a potential future treatment benefiting everything from cellular health to cardiovascular health. Many of these health benefits appear to be linked to the compound’s anti-inflammatory actions. According to new research on resveratrol and depression, this safe and natural supplement may also be an effective way of tackling one of the United States’ most challenging mood disorders.

Modern people report experiencing depression and anxiety more than generations past. In fact, over 18 percent of American adults are suffering from this mood disorder at any given time. Although all people have times when they are sad, clinical depression is more than mere sadness. In fact, it can be incredibly debilitating. People with this illness suffer from a wide variety of symptoms including fatigue, difficulty eating and sleeping, a loss of pleasure in normal daily activities and even physical pain.

Despite the growing prevalence of depression, there are very few evidence-based treatment options. The current recommendations call for antidepressant medications combined with therapy and lifestyle changes. Although there is a wide availability of these treatments, more than half of people with clinical depression do not respond to medical therapies. For these people, depression is often a long term and even lifelong battle simply to enjoy life. However, new research suggests that resveratrol may be a natural solution to the treatment of certain types of depression.

Prior research on resveratrol and mood disorders has been promising. A prior study found that mice who are given supplements of this flavonoid had a smaller inflammatory response to stress. They showed epigenetic changes consistent with higher levels of resilience. These mice also had smaller amounts of the brain synapse changes that are associated with both stress and major depressive disorder. Mice who take resveratrol have also been found to show lower levels of behaviors associated with clinical depression.

New research has shown more light on the connection between stress-related inflammation and depression. For this study, researchers distilled the three polyphenols present in grapes — including resveratrol — that they believed were responsible for preventing the inflammation and changes in brain synapses. Mice who received a supplement containing these polyphenols showed less of an inflammatory response. Surprisingly, the polyphenols each appear to reduce inflammation and neurological changes in different ways. They work synergistically to produce a measurable decrease in symptoms of depression. This could shed light on the mechanisms behind many of the health benefits attributed to resveratrol.

Are You Getting Enough Resveratrol? 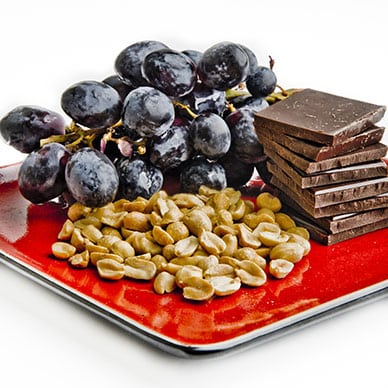 Although more research will be needed to determine if the same effect is present in humans, this is promising research. Not only does it propose a new and potentially more effective therapy for depression, but it also offers new insight into the physiological cause of depression. Resveratrol appears to have a variety of positive effects on both physical and emotional health, which leads many to wonder: Are we getting enough resveratrol in our diets?

Many of the foods that contain high levels of resveratrol are not common in the Western diet. These foods include:

Natural Ways to Improve Your Mood

Although there are few medical options for treating depression, there are several natural remedies that have been found to be effective. In addition to resveratrol, consider trying the following strategies:

Although depression is a difficult battle regardless of your treatment approach, it does not have to be a lifelong struggle. There are a variety of different options, many completely natural, that may be able to help you overcome this illness. Resveratrol is not yet approved as a remedy for depression, but ongoing studies show that it is very promising in treating this difficult-to-treat illness.