If you’ve been keeping up with recent research, you’re probably aware of the negative effects of blue light from electronic devices on sleep. More and more we are being warned to put down the smartphone and power down the laptop at night. The link between low melatonin levels and blue light is well established. However, blue light may be affecting us in more ways than we previously realized.

Throughout human history, people have gone to bed shortly after dark. Our bodies are biochemically primed for this behavior. When our retinas stop sensing light, they send a message to the suprachiasmatic nucleus (SCN) of the hypothalamus. This part of the brain functions as the timer for our internal clocks, setting off a cascade of events that prepare us for sleep. One of the main ways this happens is through the release of melatonin in the pineal gland. Conversely, in the early morning hours when light first appears, melatonin production is shut down. At this time, our bodies switch to making cortisol and other hormones that increase alertness.

Realistically, a day in modern life does not end at sundown. We are exposed to artificial lighting from a variety of sources including light bulbs, televisions, computers and smartphones. Although even dim artificial light can affect melatonin production, it appears that the effects of blue light, such as that emitted from devices like tablets and smartphones, may be even greater.

More Than Melatonin: The Problem With Blue Light

Blue light is constantly present in our world. How many people go to bed with an e-reader, tablet, or smartphone in hand? This can have an immense impact on how long it takes us to fall asleep, as well as the quality of our sleep. Human eyes have special wavelength-sensitive photoreceptors that sense blue light, which appear to shut down melatonin production more effectively than other kinds of receptors in the eye.

Mice also have a circadian rhythm, although it is the opposite of ours. Mice are nocturnal and sleep mainly throughout the day, which means they are primed to produce melatonin and fall asleep in the presence of light. Although they have a very different reaction to light than humans, they have the same receptors for blue light in their retinas. When exposed to light, mice in a recent experiment became sleepy as expected. However, when exposed solely to blue light, these mice became more active and took much longer to fall asleep. This did not occur in mice who were bred to lack the blue-light photoreceptors.

Interestingly, blue light appeared to delay their sleep as much as it does in humans, having more of an effect than green and violet light. Scientists behind these studies believe this is because blue light may also increase levels of stress hormones like cortisol. These hormones are cues for wakefulness, explaining the wakening effects of blue light on both diurnal and nocturnal animals.

Blue Light: A Possible Cause of Circadian Rhythm Disruption 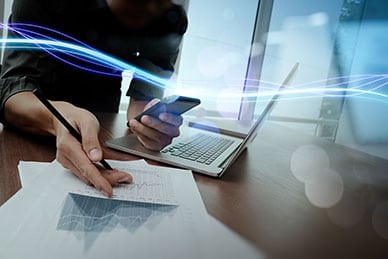 While blue light is present in sunlight, it is present in far lower amounts than that seen in electronic devices. Sunlight contains the full spectrum of light, which is why it can be refracted into a rainbow. On the other hand, most devices contain almost exclusively blue wavelengths of light. Given that blue light reduces melatonin production and may even increase cortisol levels, this has immense implications for human health.

Sleep disorders are on the rise in the United States; increasing blue light levels in our environment that inhibit melatonin production and increase stress hormone levels may be part of the cause. However, many people are tied to their devices. We use smartphones and tablets to perform work, to communicate with friends, even to read a book. Can modern people find a balance that allows them to get the sleep they need? This is the question for chronobiology researchers and other scientists who study circadian rhythm.