Irregular sleep cycles and melatonin levels can have a detrimental effect on every aspect of health, but their connection to insulin resistance and type 2 diabetes is especially strong. Recently, scientists looked for a mechanism through which the two seemingly-unrelated health issues might be linked. Their research indicated that the melatonin 1B receptor appears to be the connection, a discovery that opens a door for new and innovative treatments and preventative measures.

Shift work has been linked to a variety of diseases, including endocrine disorders such as type 2 diabetes. Melatonin appears to play a huge role in this connection. Produced in response to darkness, melatonin is a factor in a variety of endocrine reactions. It is a cue to the body that we are about to sleep, and that the body can begin the cell repair and other activities that occur when we are deep in slumber.

When people work shifts at odd hours, their exposure to natural light is affected. They may sleep during the day when sunlight is high, and spend evenings or nights under bright artificial lights. This leads to disordered melatonin production. But how can changes in melatonin levels contribute to a disorder of insulin and blood sugar like type 2 diabetes?

Melatonin Receptor 1B: The Missing Link?

Melatonin, like many hormones, exerts its effects by activating cell receptors to set off activity inside the cell. New research has found that one receptor, the melatonin 1B receptor, plays a role in the body’s response to insulin. When this receptor is activated, the cells have less of a response to insulin. This produces higher blood sugar, which is normally a healthy response at night. People who sleep at night need to conserve blood sugar so they do not become hypoglycemic during their overnight fast. However, this response can be maladaptive in people who work at night, as they generally eat meals during the night.

This explains a part of the relationship between melatonin and diabetes, but there is yet another twist. Some people have a genetic variant of the melatonin 1B receptor rather than the one present in most of the population. These people have an increased response to melatonin and thus even more insulin resistance during times of melatonin production. Disordered melatonin production coupled with high levels of melatonin at times when they are eating, as occurs for shift workers, can be especially destructive to these people’s bodies. Over time, the regular periods of insulin resistance can lead to type 2 diabetes. This hypothesis is supported by other research indicating that this same genetic variant is linked to increased prevalence of type 2 diabetes.

A Connection Between Genes, Lifestyle, and Disease 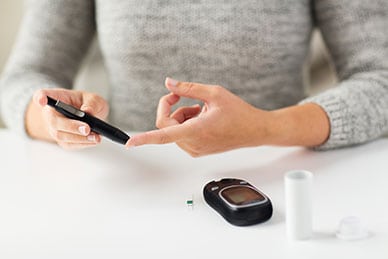 Type 2 diabetes has been assumed to have a genetic component because it tends to run in families. Even when lifestyle factors are taken out of the equation, some people are simply at higher risk. Lifestyle factors also play an important role, but the influence of genes cannot be discounted. Some people are genetically primed to develop insulin resistance and other diseases of glucose metabolism.

Researchers suggest that this new information can be used to help people who carry this genetic variant to prevent getting prediabetes or diabetes. For those with the variant form of melatonin 1B, it is even more important to have regular sleep cycles and maintain a natural circadian rhythm.

Could Sleep Be the Best Medicine?

It appears that for many people, getting quality sleep is especially important to maintaining good health. However, shift work is a necessary part of our society, as the population needs certain services available 24 hours a day. Fasting during night hours and restricting carbohydrate intake to light hours may prevent some of the ill effects of insulin resistance caused by a variant form of melatonin receptor 1B. In addition, shift work could be avoided by those who are genetically at risk of type 2 diabetes.

The number of people who are prediabetic or diabetic in the Western world is steadily growing. Identifying at-risk populations, as well as the behaviors that increase their risk, may help to stem the modern tide of endocrine disease. New advances in chronobiology are helping scientists and doctors to understand the link between melatonin and diabetes in hopes of offering better care to people who desperately need it.