One of the most common forms of heart disease is known as coronary heart disease. This condition develops due to a process called atherosclerosis which is when fatty deposits build up in your arteries. This causes the arteries to become more narrow and stiff, impeding the normal flow of blood. Possible complications of coronary heart disease include angina, which is a pain in the chest, and heart failure, which is often fatal. Atherosclerosis by itself costs $448 billion every year in healthcare. However, advancements in our medical understanding of atherosclerosis have revealed that the detrimental process is not only due to fatty buildup but also has a prominent inflammatory aspect to it.

The Link Between Lutein and Inflammation 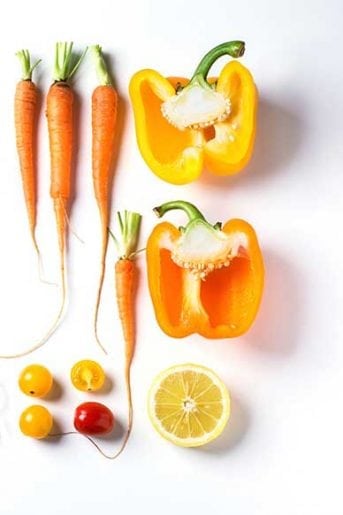 Lutein is a compound that imparts a yellowish color to certain foods. Dietary sources of lutein include broccoli, carrots, corn, kale, oranges, peas, spinach, yellow and orange peppers and egg yolk. Recently, researchers at Linköping University in Sweden published a study in the journal Atherosclerosis that suggests lutein can help mitigate inflammation. Specifically, the study looked at this yellow pigment’s effects on inflammation in heart disease patients. This finding may prove very useful to millions of people who have cardiovascular problems or who are at an elevated risk for them.

Researchers conducted the study by recruiting 193 volunteers with coronary artery disease. They measured the participants’ blood lutein levels as well as their levels of an inflammation marker known as interleukin-6. Upon analysis of the data, the scientists found that the higher your levels of lutein, the lower your inflammation marker levels will be. This suggests that starting to consume more lutein could positively affect inflammation that already exists.

Though more research is needed, there is some potential that lutein’s ability to promote healthy inflammatory processes could also be helpful for inflammatory disorders like asthma, rheumatoid arthritis and Crohn’s disease.

The Additional Benefits of Lutein

Along with other dietary nutrients like folic acid and fiber, lutein is beneficial to the health of your blood vessels. One study looked at the effects of lutein on 65 people who had “early atherosclerosis,” which is atherosclerosis in a person under the age of 59. Researchers administered either lutein or placebo to the volunteers every day for three months. Blood samples were taken before and after lutein treatment to measure blood levels of the compound.

As with the previously-mentioned study, this study found that lutein decreased levels of inflammatory marker interleukin-6. Researchers also found that levels of another inflammatory marker, MCP-1, were also decreased. Some other benefits of lutein that this study discovered include a 9.4 percent decrease in LDL cholesterol and a 34.6 percent decrease in blood triglycerides.

Lutein may play an important role in eye health. Lutein, among other pigments, protect your eyes’ retinal cells from damaging blue light. Getting plenty of lutein in your diet could help prevent or even treat macular degeneration, an age-related eye disorder that leads to loss of vision. Specifically, eating two to four eggs a day has been shown to increase levels of lutein in your eyes.

Besides lutein, there are many plant pigments that provide health benefits. Many of these, including lutein, belong to a family called carotenoids. Carotenoids include such beneficial compounds as beta-carotene and lycopene. 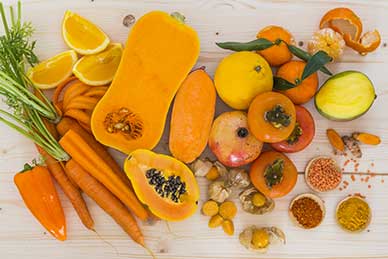 Good sources of beta-carotene include:

Some examples of lycopene sources are:

Though lutein was the only carotenoid found to have benefits relating to inflammation, the other carotenoids have their own advantages. Beta-carotene is an antioxidant that may slow cognitive decline and may help preserve lung strength in older adults. Lycopene is also an antioxidant, and research suggests it may have benefits for eye, brain, heart and bone health.

The Importance of a Plant-Rich Diet

The various antioxidants found in fruits and vegetables are of great importance. For optimum health, it’s best to make sure you consume a wide variety of fruits and vegetables every day. This way you can receive a wide variety of antioxidants and beneficial compounds, as well as vitamins and minerals. Experts recommend that you eat four to five servings of vegetables as well as four to five servings of fruit daily. Try to eat some from each color group—red, orange and yellow, dark green, light green and blue and purple.