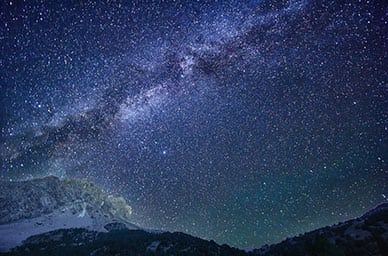 Modern technology has enabled human civilization to flourish as never before. We can work odd shifts, entertain ourselves until late at night, and continue living our lives long after the sun has set. We even can walk in relative safety late at night thanks to street lights. However, light can pollute an area just as a toxic chemical can. Many people live in places where they can no longer experience the night sky. The haze of nighttime light in cities and suburbs leaves over half of all Americans and up to 80 percent of Europeans unable to see the Milky Way. In addition, many people live in areas of the Western world where they can see only less than one hundred of the tens of thousands of stars we used to experience. Once a huge part of human imagination, the night sky is now foreign to many people. When Los Angeles lost power in 1994, there was a mild panic over a strange silver cloud in the sky at night. This cloud was actually the Milky Way, which many residents of the area had never seen due to the light pollution of city.

Is Light Pollution a Threat to the Environment?

Although we mainly discuss circadian rhythm in the context of human health, all living things live according to a rhythm of some sort. These include circadian, or 24-hour rhythms, seasonal rhythms and monthly rhythms. Light levels are a major cue of the time of day, month and year to a wide variety of organisms. A modern world filled with constant light can have serious effects on the environment. 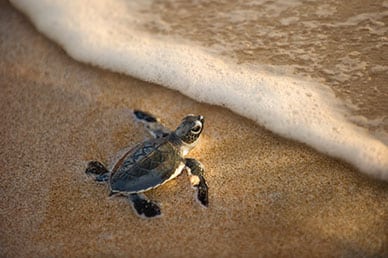 The New York Times recently listed the many ways that light pollution is affecting our environment. Coral release eggs and sperm according to the cycles of the moon. With light pollution obscuring levels of moonlight, populations are dying as there is no coordinated breeding. Baby sea turtles hatch on beaches and crawl toward boardwalks and suburbs rather than toward the moon’s reflection on the ocean, creating wide-scale death. Attracted to light, many birds and insects fly into buildings and lights rather than breeding or migrating. While the effects on humans may be less noticeable, light pollution indeed has a measurable effect on us.

The human circadian rhythm is controlled by light or the lack thereof. When our retinas stop sensing light, they send signals to the suprachiasmatic nucleus (SCN) of the brain, which then cues other brain centers to produce biochemicals and hormones that induce sleep. These hormones also play a variety of other important roles, such as repairing DNA, consolidating memories and cleaning metabolic waste from cells. Light pollution does not just leave us tired, but has a variety of negative effects that accumulate over our lifetimes.

Medical authorities are increasingly recognizing that nighttime light may be a powerful health risk. We are warned to avoid screens and dim our lights at least an hour before we go to bed. However, the light pollution resulting from human civilization may have equal or even greater effects. People in well-lit urban areas are more likely to have sleep disorders and report feeling fatigued during the day. As a result, the American Medical Association has warned against bright, high temperature lighting such as LED street lights. This type of light travels further, illuminates the night more, and has a greater effect on our brains. Although lighting cities and suburbs with street lamps is necessary for human safety, the choice of light may make a huge difference in how area residents sleep at night.

Stephen Hawking once advised people, “Look up at the stars and not down at your feet.” It is crucial to both human health and the health of the environment that we have a dark night. However, modern life makes this difficult and even, at times, impossible. Restoring a dark, starry night and thus a healthy circadian rhythm to our existence may be an important and necessary public health measure.