Cancer was once a dreaded death sentence. New research, specifically studies on cancer and the circadian clock, are offering new understanding and new hope.

Around half of all people will be diagnosed with cancer in their lifetime, making it one of the most common diseases in the modern world. While cancer once had a very high mortality rate, many people are now able to survive this disease and thrive with the help of modern therapies and treatments. The emerging science of chronobiology may hold the key to understanding and treating many common types of cancer.

Cancer and the Circadian Clock

Cancer cannot grow and metastasize without sabotaging the “checkpoints” on cell division and metabolism that exist in healthy cells. The circadian rhythm is intricately entwined with these checkpoints. Every cell in our body lives, functions and dies by a rhythm set by our internal clocks, which are in turn set by light levels, the times we eat, and a variety of other factors. In cancer cells, these rhythms are often disrupted so the cell can divide without normal controls.

In a recent study of liver tumors, the cancer cells were found to not only divide inappropriately, leading to tumor growth, but also to interfere with the normal function of the liver as a whole. The liver is responsible for a wide range of metabolic activities, which include glucose regulation and toxin removal from the blood. When liver cells turn cancerous, they act erratically. A small liver tumor can disrupt the entire body’s metabolism by disrupting how glucose is regulated.

Marching to the Beat of Its Own Drum

In many ways, cancer cells act like “hijackers,” taking over normal bodily functions and performing them in an erratic way. However, not all tumors function independent of the circadian rhythm. Some cancers, such as certain types of leukemia, depend on circadian rhythm genes to survive. A recent study found that normal stem cells in the blood can survive even without BMAL1, a crucial gene that regulates the circadian rhythm of each cell. On the other hand, stem cells with leukemia die when this gene is “knocked out.” This insight may present a new method of treating leukemia by genetically modifying cells with this cancer so they don’t express a gene that is important to their survival.

Liver cancer and leukemia are not the only two cancers to show a link to the circadian rhythm in research. Breast cancer also appears to be associated with a circadian rhythm gene. Because breast cancer in itself is not life-threatening, metastasis is generally its biggest threat. Cancerous cells can eventually leave the breast and travel to the brain, the lungs, or the bones, where they can interfere with more necessary tissue. Having even small mutations in a circadian rhythm gene called Arntl2 is an important predictor of breast cancer death. The reason for this increased morbidity is that tumors with a functioning Arntl2 gene are unlikely to metastasize. 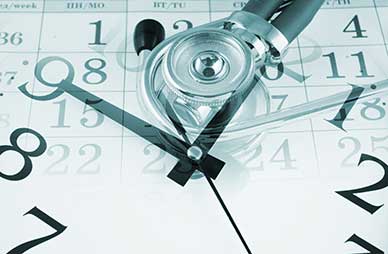 The link between cancer and the circadian clock is especially clear when you examine the relationship between sleep and cancer outcomes. Regardless of the type of cancer, having sleep apnea (and possibly other disorders that interfere with sleep) is a risk factor for poor cancer outcomes. People with sleep apnea suffer from decreased oxygenation during their sleep, which increases levels of VEGF, or vascular endothelial growth factor. VEGF is crucial for the survival of cancer cells because it creates new blood vessels, allowing them to get the nutrients they need to grow out of control. While we associate sleep apnea with poor sleep and snoring, it may have even greater effects on our health in the long run.

Because cancer is so dependent on the circadian rhythm, some people may benefit from taking medications that attack cancer cells at certain times of day. Treating a disease at a particular time of day, a practice known as chronotherapy, ensures that cancer cells are hit with the right drugs at the right time—the time when they are most likely to deliver optimal effects. This practice can also lead to fewer side effects, as treatments can be targeted to times when they have the least impact on healthy cells. While normal cells undergo growth and metabolism only at certain times of the day, cancerous cells that have lost their checkpoints tend to divide without any set time frame or even a pause. They are in constant growth phase. Taking medications at times of the day when healthy cells are not active (but cancer cells are!) allows drugs to hit cancer cells alone while sparing healthy ones.

While treatment for cancer was once limited to surgery, radiation and chemotherapy, new research has brought forth new medications and treatments that kill malignant cells by disrupting their growth and other key metabolic processes. Understanding more about the relationship between cancer and the circadian clock will allow doctors to attack cancer more aggressively while yielding better outcomes for the people who suffer from this disease. Because all of us will suffer from cancer or love someone who does in our lifetimes, this is truly life-changing research.