Researchers have found numerous health benefits of green tea over the last few decades. A new study has uncovered a new perk to the beverage: An active compound in green tea called EGCG may help combat the negative health effects of a Western diet. The compound was found to reduce the risk of obesity, insulin resistance and memory impairment in mice who ate a high-sugar, high-fat diet.

Green tea has several compounds that give it its subtle flavor. Epigallocatechin gallate (EGCG) is one of several compounds in green tea called a catechin. EGCG is the most abundant catechin in tea and a powerful antioxidant. 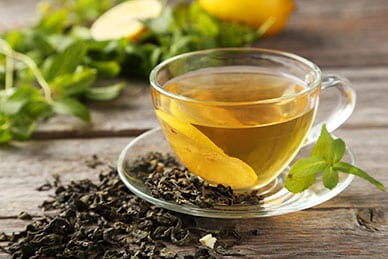 This compound has been found to interfere oxidation, which means it reduces oxidative damage in cells, a contributing factor in illnesses like cancer. Some studies have also indicated the compound has some protective benefits on the brain. One 2016 study published in Neuroscience analyzed EGCG’s effect on Down Syndrome and found it offers at least some protection for the brain. Another study published in the Journal of Alzheimer’s Disease found the compound, along with exercise, might reduce the effects of Alzheimer’s.

This bioactive chemical is also believed to play a role in heart health and weight loss. One study published in Nutrients in 2015 suggested the chemical can lower the risk of metabolic syndrome, a group of disorders that contributes to heart disease and obesity.

A Western diet is defined as one high in processed foods, red meat, saturated fat, refined sugar and refined carbohydrates while low in vegetables, fruit, whole grains, chicken and seafood. While this diet originated in developed Western nations, the nutritional transition is now spreading across the world. As income goes up in developing countries, people choose more meat and calories in their diet. A move toward fast food has only sped up this transition.

A Western diet has been linked to obesity, weight gain and Type 2 diabetes. Studies have also indicated it may increase the risk of cognitive impairment. Research has also found a Western diet interferes with the immune system. A diet high in fructose and palmitic acid, commonly found in candy bars, creates an immune reaction because the body confuses it with E. coli and other bacteria.

The new study, published in The FASEB Journal, suggests that the active compound in green tea may help guard against these health consequences.

Researchers at the College of Food Science and Engineering at Northwest A&F University in China conducted their research by studying three groups of three-month-old male mice. For 16 weeks, each group consumed a different diet. One group of mice ate a high-fat, high-fructose (HFFD) diet. A second group ate an HFFD diet plus two grams of the green tea compound per liter of water and the last group ate a standard diet.

After 16 weeks, the mice on the HFFD diet gained more weight than the control. The weight gain among mice supplemented with the green tea compound was much less severe. The researchers also found that the mice who ate a Western-style diet combined with the green tea compound were less likely to develop insulin resistance in response to their diet. 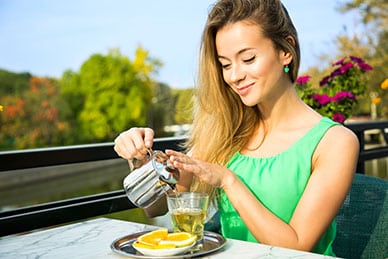 Researchers also tested the memory of the mice by using the Morris water maze test. This navigation maze monitors the ability of the mice to find an escape platform. Mice who ate an HFFD diet along with the green tea compound were faster at finding the escape platform and took a shorter path to reach it than mice who only ate the HFFD diet.

Researchers stress that human trials are still necessary to confirm the findings of the study, but the evidence is compelling that a diet high in green tea may offer protection against the risks of a high-fat, high-sugar diet.

Research has shown that the more green tea you drink, the greater the health benefits. While any amount of green tea each day is good, research indicates that two to three teacups (not mugs) of tea per day is enough for most health benefits. Still, research has found that drinking up to five cups of tea per day can reduce the risk of stomach cancer. If you are trying to improve your metabolism and lose weight, your goal should be drinking up to seven cups per day. One study published in the Journal of Nutrition found that this level in mice lowers triglyceride and cholesterol levels, reduces fat in the liver and led to less fat and weight gain.

Ten cups of green tea per day is considered the upper limit and you should not try to exceed this amount. Because green tea can reduce absorption of folic acid and iron, it’s recommended that you drink tea between meals, not with food. Drinking too much green tea can also be a bad thing because it contains caffeine. If you want to enjoy the health benefits of green tea without the downsides, or you aren’t a fan of tea, look for a supplement that provides EGCG from green tea.