Flavonoids are a group of naturally occurring plant-derived compounds which are amongst the most powerful and abundant antioxidants in our diets. Growing evidence suggests that consuming flavonoids may protect against prostate cancer.

What Is Prostate Cancer?

Cancer begins when our cells begin to uncontrollably grow, divide, and, in some cases, spread. Nearly any cell in the body can become cancerous. Prostate cancer occurs when the cells within the prostate gland begin to grow out of control. Prostate cancer is the most commonly diagnosed form of non-skin cancer among men. Each year, nearly 200 thousand American men will be diagnosed, and almost 30 thousand will die from prostate cancer. In Europe, around 2.6 million new cases are registered each year, with prostate cancer being responsible for around every 10th cancer-related death in men. Most cases develop in men that are over 65 years of age.

There are several different forms of prostate cancer. Though some forms may grow and spread quickly, cancer of the prostate is typically slow-growing and often presents no symptoms until advanced stages. Many older men may incur prostate cancer that never poses a threat to their health. In some cases, however, prostate cancer can be much more aggressive, growing rapidly and spreading to other parts of the body.

What Are the Risk Factors for Prostate Cancer?

Researchers are still trying to understand exactly what causes cancer of the prostate, but there are some known risk factors that may predispose a person to develop prostate cancer, risk factors such as:

Flavonoids and Prostate Cancer: What Is the Link?

The lowest rate of prostate cancer risk can be found in populations who consume the largest amount of flavonoids. Thought to be partly due to a higher consumption of green tea and soy products, which are full of phytoestrogens, diets in East Asian countries are a hundred times more abundant in flavonoids than a Western diet, and they are significantly less likely to develop cancer of the prostate. 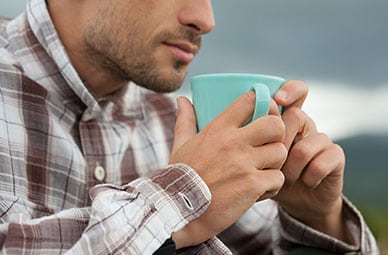 Corresponding observational studies have indicated that migrants who are born in Japan but move to the United States have a higher rate of prostate cancer than those living in Japan. For Japanese Americans who were born in the States, that rate increases even further, nearly matching that of white American men. This suggests that dietary, environmental and lifestyle factors play key roles in the occurrence of prostate cancer.

In addition to being rich sources of essential vitamins and minerals, plant-based foods also contain many beneficial phytonutrients. Plants naturally produce these chemicals in order to promote growth and protect themselves from their environments. One class of these phytonutrients is flavonoids.

Flavonoids are a group of antioxidant compounds that can be found in fruits, vegetables and grains, as well as in the barks, flowers, stems and roots of plants. Over four thousand different flavonoids have been identified, which can be subdivided into several distinct groups, eight of which are considered to have any dietary significance: anthocyanins, chalconesflavones, flavonols, flavanones, flavanonols and flavanols (also called flavan-3-ols or catechins).

Flavonoids have become well known for their numerous beneficial health effects. Flavonoids possess anti-carcinogenic, anti-inflammatory, anti-mutagenic, anti-oxidative and neuroprotective properties. They are an indispensable component in many different nutraceutical, pharmaceutical and medicinal applications. Consumption of flavonoids has been shown to promote longevity, restore intestinal microbiota, help with weight management, curb cardiovascular disease and possibly prevent cancer. There are also dietary supplements available that provide flavonoids like quercetin, catechins and more, although it’s important to note that taking a supplement should not substitute for obtaining these important nutrients from your diet.

Studies Have Shown Flavonoids May Protect Against Prostate Cancer

In a recent study that is set to be published in Complementary Therapies in Medicine, researchers directed their attention towards a select group of flavonoids known to have antiproliferative properties. Among the flavonoids that were tested, flavonols and catechins consistently showed a significant reduction in the risk of prostate cancer.

Several studies have exhibited the flavonoid quercetin to inhibit the growth of cancerous cells. In one study that was published in the journal Experimental and Therapeutic Medicine, researchers from China’s Jiamusi University demonstrated that the flavonoids genistein, quercetin and luteolin stopped the development of prostate cancer cells in vitro. According to research published in Oncology Reports, quercetin has been shown to inhibit the development and progression of prostate cancer in both in vitro and in vivo models. Even though more human clinical trials are needed to prove the efficacy of flavonoid treatments, their data adds to growing evidence that flavonoids possess powerful preventative and chemotherapeutic properties.