A recent study led by a team of Japanese researchers and published in the British Medical Journal adds to mounting evidence that adequate levels of vitamin D may provide protection against cancer. The research was conducted by a team from the National Cancer Center in Tokyo and was the first study to investigate the link between vitamin D and cancer within an Asian population.

Vitamin D and Cancer: Is There a Correlation?

Vitamin D is an essential nutrient that our bodies require for bone health and immune function. While some experimental evidence exists suggesting an association between vitamin D and cancer risk, the majority of the research has been carried out on American and European populations. Evidence regarding Asian populations is still limited.

According to the researchers, “given that vitamin D concentrations and metabolism vary substantially by race/ethnicity, whether similar associations would also be observed in non-Caucasian populations remains to be clarified.” What that in mind, researchers aimed to evaluate the association between vitamin D levels and the risks of cancers in an Asian population.

In a recent study, researchers aimed to evaluate the association between vitamin D levels and the risks of cancers using a final cohort of 33,736 participants who were between the ages of 40 and 69. At the beginning of the study, the participants provided detailed information on their lifestyle and medical history. Blood samples were assessed for vitamin D levels, and the participants were split into four groups, ranging from lowest to highest vitamin D levels. The participants were monitored for around 15 years while researchers examined the likelihood of cancer diagnosis. The team adjusted for certain risk factors such as age, body mass index and physical activity as well as cigarette, alcohol and dietary intake. After analyzing the data, researchers discovered that those with the highest levels of vitamin D had a 22 percent lower chance of being diagnosed with cancer.

When looking at individual cancers, there was no statistically significant evidence of lower cancer rates, with the exception of liver cancer. “People with the highest vitamin D levels were 55 percent less likely to be diagnosed with liver cancer than those with the lowest,” according to the study. There was some evidence to suggest that vitamin D levels may affect breast cancer occurrence before menopause, but the researchers state that “although of interest, this hypothesis should be viewed with caution and needs further confirmatory evidence.”

While the results seem to support the hypothesis that higher vitamin D levels may protect against cancer, the researchers noted that “the lower risk associated with higher circulating vitamin D concentration seemed to show a ceiling effect,” which suggests that above a certain level of vitamin D, there are no additional benefits. “Future studies are needed to clarify the dose-response pattern and the optimal concentrations for cancer prevention,” they concluded.

Understanding the Fundamentals of Vitamin D 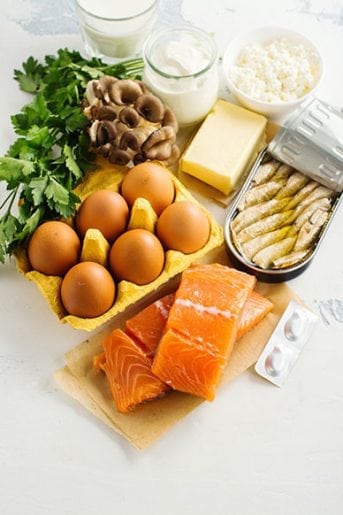 Vitamin D is one of the micronutrients that are critical to human survival. It is a fat-soluble vitamin that differs from most other vitamins in that our bodies are able to produce most of what we need with regular exposure to sunlight. Vitamin D functions as a pro-hormone: It modulates hormonal balance and immune response regulation in the body. Vitamin D serves several important functions in the body. It’s essential for bone maintenance. Because vitamin D promotes calcium absorption and enables the mineralization of bone, it’s vital for bone growth and regeneration.

Outside of its essential functions in bone, heart, and immune health, vitamin D boasts a few other surprising benefits:

According to data from 2011, approximately 40 percent of adults in the US are deficient in vitamin D. People with darker skin, those who regularly wear sun protection, people who limit their outdoor activity or those who live in areas prone to heavy air pollution are most at-risk for a vitamin D deficiency. Age, weight, diet and certain disorders also play a contributing role.

The symptoms of a vitamin D deficiency can be hard to distinguish because of their sometimes subtle nature. Some of the more notable symptoms include:

It can be difficult to get a sufficient amount of vitamin D each day through sun exposure and food intake alone, so it’s generally recommended to take a supplement that contains vitamin D. The recommended daily allowance of vitamin D is between 400 to 800 IU/day for adults, however, research suggests that this level may be too low to see the therapeutic or preventative benefits of its usage. Clinical trials have indicated that the lowest effective dose range is 1,000-2,000 IU/day. The safe upper limit in Canada and the United States is 4,000 IU/day.