In general, men are often perceived as being the physically stronger (and thus possibly healthier) gender. However, their response to infectious illness appears to be an exception to the rule. Many people over time have noted that men subjectively report worse symptoms from colds, cases of the flu and other illnesses. The same illness that most women will work through can leave men bed-ridden for days. Is there a difference in the immune systems of the sexes? A new study has weighed in on the man flu and appears to have surprising results.

Do Men Really Get Sicker?

Many sitcom episodes have been written about the different response that men and women have on average to colds and illnesses. However, it is not humorous for many couples. This is a very real source of tension for many couples, particularly when both are ill and the woman is left with the majority of household duties while the man stays in bed. Dr. Kyle Sue decided to look at this issue more closely to determine if there is a biological cause.

Dr. Sue found several studies indicating a difference in the immune systems of men and women. Women have a greater response to the flu shot and report more side effects, which suggests a stronger immune system. They also are less likely to be hospitalized for influenza and other infectious diseases according to a study in Hong Kong. Last, men subjectively report worse symptoms than women—which is unsurprising to many. The study’s authors concluded rather controversially that many men simply need more care and nurturing when they are ill.

Differences in the Male and Female Immune System 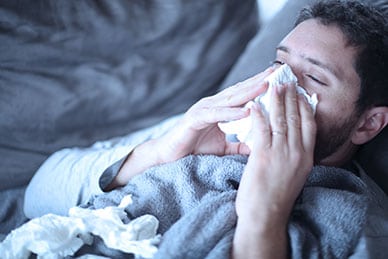 Although this study has been a source of amusement for many people, there appear to be very real differences between male and female immune systems. Studies on mice have found that female immune systems are indeed more responsive than male ones. While this leaves women at a higher risk of autoimmune disease, it also can give them additional protection against bacteria and viruses.

In addition, testosterone appears to work to suppress the immune system. Men with higher testosterone levels overall have less immunity after vaccinations. Testosterone is the primary hormone associated with male traits, so this factor alone may have a significant impact on how often men get sick as well as the severity of their symptoms. In addition, estradiol, an equivalent female hormone, appears to act instead to stimulate the immune system and keep women from getting sick as often.

Is the Man Flu a Myth?

Dr. Sue of the recent study on male immunity feels that men’s notorious behavior when ill may have an evolutionary origin. Because men traditionally hunted, being even mildly ill could be life-threatening. Staying in bed and seeking pampering and care from one’s partner might have saved many lives. He argues that men need this nurturing so they can heal and get back to their duties more quickly.

Although many women obviously feel that the man cold or flu is a myth, there is nothing wrong with providing loving care for a partner when they are ill. If men can also take the time to pamper sick girlfriends and wives, many couples will be happier indeed. More studies will need to be performed to determine if there are truly meaningful differences in female and male immune systems, but the current research is interesting indeed.

Regardless of your gender, there are several ways that you can prevent illness this winter. Consider incorporating the following habits into your life:

There is no way to know if men truly are hit harder by infectious illnesses than the women in their lives. However, both sexes should make it a priority to prevent illness and to nurture each other through them. While many men probably could be more functional when they are sick, staying in bed and nurturing yourself is actually the best way to handle a cold or flu.