You are here:Home / Products / Ferrochron® 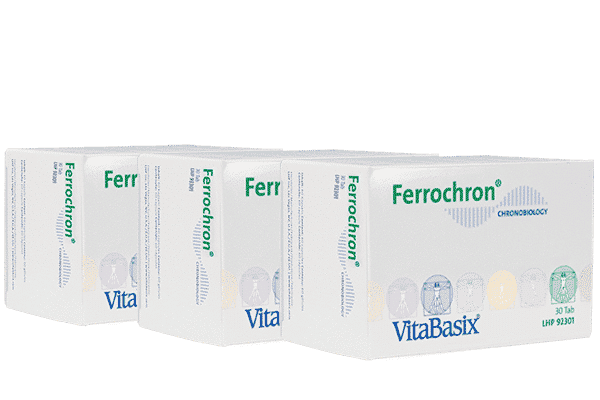 Chronobiological dietary supplement with three different iron salts as a multi-layered tablet for controlled release with improved tolerability compared to iron preparations of a pure sulphate basis; developed for treating or preventing iron deficiency states in pregnant women, children and the general population.

Iron is an essential microelement that plays a role in many metabolic processes, in particular those associated with transporting oxygen and regulating cell growth and differentiation. In fact, iron is involved in well over 100 metabolic processes. Because the body itself cannot produce it, iron must be obtained from food. Iron deficiency is the most common nutrient deficiency worldwide. The condition develops gradually, starting with a negative iron balance when the dietary intake is insufficient to meet the daily need.

When a deficiency exists, the oxygen supply to cells is reduced, which can lead to lower physical performance accompanied by tiredness and a weakened immune system. Other typical signs are paleness, dry skin, brittle fingernails and a tendency to become overweight. High-risk groups include women in general, children and pregnant women; an estimated 22 percent of women in industrialised countries are affected. Up to 47 percent of all school-age children worldwide also develop some form of anaemia, 25 percent of whom suffer from iron deficiency anaemia, the most severe kind of iron deficiency.

The former is derived from haemoglobin and is found in foods of animal origin. The latter is found in plant products and is the form that nearly all dietary supplements or enriched foods contain, but is often less easily absorbed by the body.

There are a multitude of factors influencing the absorption of non-haem iron; for example, many foods and drinks contain components that interfere with iron uptake. Therefore, it is always best to take iron supplements during the time between meals. Some diseases and certain drugs can also inhibit iron absorption. Furthermore, different iron salts are more readily absorbed in different sections of the gastrointestinal tract.

Unlike conventional food supplements, which typically contain only one salt such as iron sulphate, Ferrochron® is a unique product that largely replaces sulphate with other iron salts that are more tolerable and more bioavailable. By using three-layered technology, the different iron salts are released in different sections of the gastrointestinal tract. This maximises the advantages of each different salt while also reducing side effects and greatly increasing bioavailability.

The tablets have the following structure:

An intermediate layer releases iron after a short delay, starting 1 – 2 hours after taking the tablet, while it is being transported through the duodenum. This layer also contains 1 / 3 of the total iron, but in the form of iron sulphate. To increase the bioavailability of this iron salt even further in this part of the intestine, the tablet additionally releases vitamin C at this stage. This combination also helps to reduce any of the side effects that can occur from high doses of iron sulphate to a minimum.

A third, long-delay layer only starts to release its iron 2 – 4 hours after taking the tablet. At this time, it is passing through the small intestine (from jejunum to ileum). This layer contains highly bioavailable, microencapsulated iron pyrophosphate coated with lecithin. This ensures maximum uptake of the remaining 1 / 3 of the iron as it passes through this part of the digestive tract, as has been confirmed in many studies.

This combination of three iron salts reduces the amount of iron sulphate to an absolute minimum, thereby maximising tolerability while at the same time ensuring high bioavailability of the entire iron content. 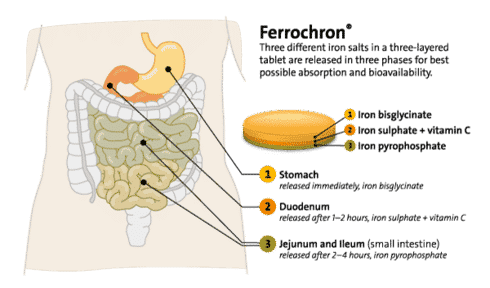 In normal cases, take 1 tablet (elemental iron) per day 120 – 30 minutes before dinner. For acute iron deficiency or pregnancy, the dose can be increased up to 2 tablets per day.

Children aged 6 years or older may take one tablet per day after consultation with their physician. Take the tablets with plenty of fluid (but not with milk, coffee, alcohol or fruit juices).