Most modern people accept that the “correct” way to sleep is to go to bed at night and stay asleep until morning. In fact, waking at night and being unable to go back to sleep is often considered a sleep disorder. However, there is evidence that humans did not always consider a full night of uninterrupted sleep ideal. Choosing to engage in “two sleeps” may be a common pattern in human history—and a healthy pattern as well.

Bimodal, or segmented, sleep appears to have been the way that many of our ancestors slept. Ancient physicians, as well as authors such as Charles Dickens and Chaucer, refer to a first and second sleep in their writings, with the time between the two sleeps spent engaged in quiet activities. Historians believe that this habit disappeared some time around the turn of the twentieth century when electrical light became common.

Just 200 years ago, people routinely woke at night to socialize, pray, read, have sex and otherwise enjoy some quiet time. Most people stayed in bed during this time, although some got up for short periods. The practice of two sleeps appears to have been especially common among the working classes, who were too worn out to be productive immediately after arriving home from a day of manual labor. Doctors even recommended the period between the first and second sleep as the best time to conceive a child.

The Problem of Middle-of-the-Night Insomnia 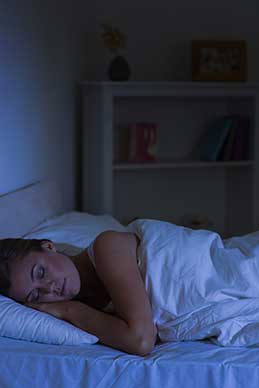 The very sleep pattern that our ancestors viewed as normal is now often considered a sleep disorder. Sleep maintenance, or middle-of-the-night insomnia, is the most common type of insomnia in the United States. While this disorder can be caused by GERD, anxiety and other health disorders, many people who experience it appear to have no physical cause. Doctors recommend that people who wake at night and cannot get back to sleep do some type of sedentary activity in low light and go back to sleep when they are able, which is strikingly similar to how our ancestors once passed midnight hours.

Middle-of-the-night insomnia may be common because it is a normal human sleep pattern. Could it be that some people who believe they have a sleep disorder may in fact just need to rearrange their evening and night time schedules to allow two sleeps?

Are Two Sleeps Really Better Than One?

Researchers believe that ancient humans tended to sleep around three-and-a-half hours in each sleep cycle, with around two hours between the first and second sleep. Melatonin levels remain high throughout both sleeps and the quiet wakeful phase in between, while the sleepiness preceding the second sleep is caused by a surge in the sex hormone progesterone. Choline levels also differ in people who follow the practice of segmented sleeps. This means that the second sleep has more cholinergic REM phases, which causes more restful slumber and more lucid dreams.

For many people, it could be that middle-of-the-night insomnia is not so much a sleep disorder as a sign that they need two sleeps rather than one. That nighttime period of wakefulness may be the most creative time, while the second sleep appears to be more restful than a normal continuous seven-hour sleep.

Why Did We Start Sleeping in One Block?

If sleeping in two blocks is healthy, why did people stop? There are a few suggested reasons. First, electric light made it possible for people to stay up later at night, making it difficult to get in two full blocks of sleep plus a rest period. Second, the world began to focus more on efficiency. Suddenly, laying in bed and being relatively unproductive for several hours every night was viewed as a waste of time.

While most people have adapted to the practice of sleeping in one seven to eight-hour block, some still struggle. Sleep maintenance insomnia may merely be a return to old ways, which explains why it is so hard to treat. If you have trouble with waking in the middle of the night, it may be time to see if segmented sleep, or engaging in two sleeps, works better for your body.