Depression is one of the most common mental illnesses in the developed world and one that takes a huge toll on both sufferers and their loved ones. Depression also costs the nation as a whole, with its economic impact estimated at more than $50 billion a year in the United States alone. New research on the link between melatonin and depression suggests that melatonin may be an effective natural way to offer relief for this difficult-to-treat illness.

Melatonin deficits have been linked to mental illness of all kinds, from schizophrenia to post-traumatic stress disorder (PTSD). Insomnia, sleeping too much and at odd hours and other sleep disorders are common and recognized symptoms of many types of mental illness. While researchers once believed this was just a result of emotional distress, these illnesses are now known to be directly affected by and linked to low melatonin and the resulting sleep disorders.

Clearly, sleep is essential to our mental well-being in a variety of ways. This link led researchers to begin looking at the relationship between melatonin levels and one of the most common mental illnesses on the globe: clinical depression.

The Link Between Melatonin and Depression

Low melatonin has been found in several research trials to be a contributing factor in major depressive disorders. In fact, scientists can predict the severity of depression symptoms from salivary melatonin levels. While low serotonin was once believed to be the main cause of depression, we now know that the human brain is not so simple. Neurohormones such as serotonin and melatonin affect each other due to the interconnected nature of the brain. Melatonin appears to be especially important in developing depression and in treating it as well.

Melatonin, combined with light therapy, has been used for years to treat Seasonal Affective Disorder, which is considered a form of depression. A new study is examining whether this supplement may be useful in treating non-seasonal depression as well. This research follows a much smaller groundbreaking study in the early 2000s that discovered melatonin was useful as a treatment for patients who had refractory, or difficult-to-treat, depression. A growing body of unrefuted evidence suggests that this natural supplement, which is affordable and available without a prescription, may be an important part of correcting neurotransmitter imbalances that cause depression.

Treating Depression in a New Generation 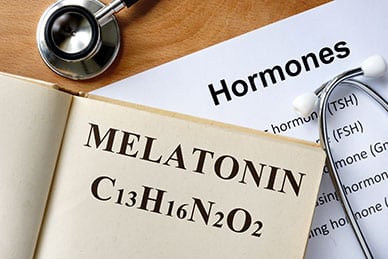 While current depression treatments such as SSRIs work for most people, there are many who struggle to live with and move on from this devastating illness. Researchers are currently looking at new ways to approach the issue of depression and mental illness in general. Melatonin appears to affect levels of both serotonin and cortisol, both of which are imbalanced in people with depression. Stabilizing melatonin levels may help other neurotransmitters to return to healthy levels. This approach to depression, addressing a root cause rather than symptoms, may be the most effective in treating a complex and multifactorial psychological disorder.

Research in chronobiology is shedding light on the strong connections between circadian rhythm and disease. Sleep is essential for good health, so stabilizing sleep cycles may improve illnesses of all kinds. In the case of clinical depression, melatonin may even be a viable stand-alone treatment. While more research will be needed before melatonin becomes a primary treatment for depressive disorders, evidence indicates that treating disorders of the circadian rhythm may be a new and more effective approach to mental illness.