Breakfast is often regarded as the most important meal of the day. As famed nutritionist Adelle Davis said, “breakfast gets the day’s work done.” New research on meal size and weight loss gives credence to this conventional wisdom by showing that eating a larger, high-energy breakfast aids weight loss and blood glucose control when compared to having our largest meals at the end of the day or eating smaller, more frequent meals.

After conducting a previous study that highlighted the fact that front-loading the day’s calories affects weight loss and blood sugar levels in non-diabetic individuals, researchers from Tel Aviv University set out to determine whether the same effects would be seen in patients with Type 2 diabetes. Their findings, presented in March at the ENDO 2018 conference, echo previous research and confirm that meal size and schedule positively affect glucose balance and weight regulation in obese patients with Type 2 diabetes.

The Effects of Meal Size and Scheduling on Metabolism 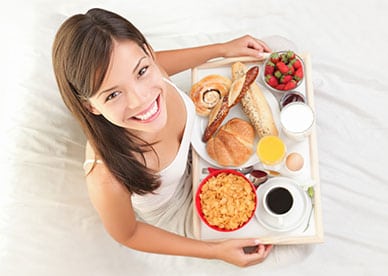 We’re all aware of how important a healthy diet is to maintaining weight, but more and more, the research suggests that when we eat may be more important than what or how much we consume. Data released by the American Heart Association shows that eating patterns have greatly shifted away from the traditional three-a-day approach in a change that is ultimately detrimental to our health. Evolving lifestyles and erratic schedules have left most of us eating around the clock.

According to the lead study author, Daniela Jakubowicz, M.D., professor of medicine at Tel Aviv University, “the hour of the day, when you eat and how frequently you eat, is more important than what you eat and how many calories you eat.” This is because of how our body’s metabolism shifts and changes throughout the day. “A slice of bread consumed at breakfast leads to a lower glucose response and is less fattening than an identical slice of bread consumed in the evening,” Dr. Jakubowicz explained.

Because our internal clocks are so responsive to food supply or restriction, meal timing has serious implications on the development of obesity, Type 2 diabetes, and cardiovascular disease.

The team studied a group of 29 obese men and women with an average age of 69 who had Type 2 diabetes and received insulin treatments. The participants were randomly assigned to one of two different diets that consisted of an equal number of calories but scheduled meals at different intervals of the day. The first diet group (Bdiet) ate three meals a day that consisted of a large breakfast, a medium-sized lunch and a smaller dinner. The second diet group (6Mdiet) ate a traditional diabetic diet that consisted of six small meals and three snacks spaced evenly throughout the day.

After three months, patient data was analyzed. According to the data, the oft-touted advice to eat less, more often just may be false. Researchers found that overall, the Bdiet group lost an average of 11 pounds, while the 6Mdiet group actually gained around three pounds. Mean glucose levels dropped for the Bdiet group, but not the 6Mdiet group. 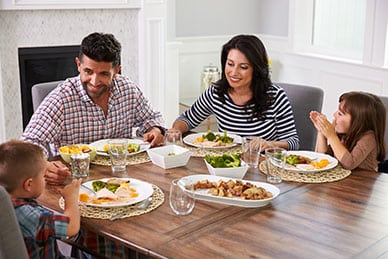 The Bdiet group needed considerably less insulin throughout the day, while the 6Mdiet group found they needed to increase their insulin usage. Reported feelings of hunger and cravings were decreased among the Bdiet participants but conversely increased in the 6Mdiet group.

The researchers noted a significant reduction in overall glycemia in as little as 14 days of following the Bdiet, suggesting that meal timing itself has a fast-acting beneficial effect on glucose balance. “This study shows that, in obese insulin-treated type 2 diabetes patients, a diet with three meals per day, consisting of a big breakfast, average lunch and small dinner, had many rapid and positive effects compared to the traditional diet with six small meals evenly distributed throughout the day: better weight loss, less hunger and better diabetes control while using less insulin,” Dr. Jakubowicz said.

When You Eat May Be the Key to Optimal Health

The team’s efforts are related to other findings on the critical effects of meal timing. An earlier study on prolonged delayed eating found that skipping breakfast or having the first meal of the day after noon caused weight gain, slowed metabolism, and produced an increase in cholesterol and insulin levels in participants. Both studies agree on the fact that all things considered equal, those who eat earlier in the day fare better health.

Researchers believe that matching our meals to our body clocks could be an easy dietary adjustment with great therapeutic advantage. “A diet with adequate meal timing and frequency has a pivotal role in glucose control and weight loss,” Dr. Jakubowicz said.