Soy is one of the more controversial foods in the modern culinary world. People read conflicting headlines every day that imply soy is either very good or very bad for us. However, there is no conflict about the benefits of soy isoflavones. These unique phytoestrogens from soy protein are increasingly being found in research to have a variety of positive health effects. Even if you are not a fan of soy in general, you may want to add isoflavones to your diet to get some of the health benefits of this kind of protein.

What Are Soy Isoflavones?

Why do people in Asia and other areas of the world have lower risk of heart disease and other serious illnesses? Many doctors and researchers believe that the answer is their high dietary intake of soy. Soy has a variety of health benefits, ranging from hormonal balance to preventing cancer to improving cholesterol and blood pressure numbers. According to new studies, these may be almost entirely due to the action of soy protein compounds such as isoflavones in the human body.

Isoflavones are a type of phytoestrogen, a substance that mimics the effects of estrogen in the human body, found mainly in soybeans as well as other legumes. They have been linked to a variety of beneficial effects, including:

New studies suggest that these health benefits may be even more pronounced than previously believed. Soy isoflavones appear to make a meaningful difference in disease risk, often drastically reducing rates of certain diseases for many of the conditions listed here. This may be a major reason for the much higher rates of chronic disease in Western countries where soy and soy products are not a major part of the diet.

How can such a small component of soy protein have such a huge effect on a person’s health? Researchers believe that this is due to the inflammation-modulating and antioxidant effects of isoflavones. Oxidation and inflammation are the root of many diseases, so a protein that attacks these root causes will have beneficial effects in a variety of conditions.

In recent studies, isoflavones have been found to promote healthy cellular inflammatory processes. Only a small dose of soy protein is needed to get this effect; in recent studies, replacing just 12 percent of protein with soy was enough to get measurable health effects. This will benefit not just inflammatory diseases such as IBS and Crohn’s disease, but a variety of health issues. Caused by over-activity in the immune system, inflammation is believed to be the root cause of many serious diseases including heart disease and autoimmune disorders. Treating inflammation may reduce the risk of developing a wide range of diseases.

Second, isoflavones have been found in laboratories to act as antioxidants. They bind to and remove the dangerous oxygen radicals that are produced in cells as a result of different metabolic processes. If left unchecked, these radicals damage DNA and cell proteins, contributing to aging, cancer and a variety of negative health conditions. The antioxidant role of isoflavones is likely responsible for many of their health benefits.

Protecting against inflammation and oxidation are key to maintaining whole body health. This may be why people in Japan, China and other areas of high soy consumption have lower rates of serious diseases that threaten so many people in the West.

Getting More Isoflavones in Your Diet 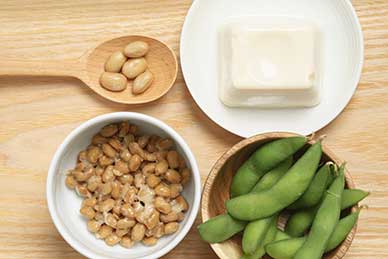 How much soy protein do you need in your daily diet to get these health benefits? Doctors recommend that people take 50 mg of soy protein a day to improve their cardiovascular risk, or 40 to 80 mg a day if taking it to treat menopause or other hormonal imbalances. Regardless of the amount your physician recommends, there are a variety of ways to add more isoflavones to your diet. Consider adding some of these tasty foods to your diet:

In addition, there are many supplements including capsules and protein shakes on the market that contain therapeutic levels of isoflavones and other beneficial components found in soy proteins. It is incredibly easy to add more of these nutritious proteins to your diet if you are interested in reaping the positive health effects.

Inflammation and oxidative stress appear to be the root causes of many of the most deadly and feared diseases faced by mankind. However, there are ways to naturally and safely prevent these conditions. Taking an isoflavone supplement may be a very important part of maintaining whole body health for a lifetime.