It’s common knowledge that our bodies are comprised of cells, however most people are unaware that we also rely heavily on the presence of bacteria, fungi, viruses and other microbes. In fact, these microbes are just as common as human cells. Each person’s body is comprised of up to 40 trillion human cells and up to 38 trillion microbial cells. The vast majority of those microbial cells thrive in the large intestine, where they form a community called the gut microbiome.

The gut microbiome functions in tandem with the immune system, helping to strengthen it against the infections and illnesses people experience. As experiments with mice have shown, an absence of a gut microbiome inhibits the immune system’s ability to function. This is because the microbes in the gut microbiome help the body process vitamins, minerals and other nutrients necessary for good health. In addition to aiding in the digestive process, the gut microbiome, which is considered a hidden organ, helps many other biological functions. According to a new study, gut bacteria promote healthy aging; a discover that makes it even more important to maintain a healthy and diverse gut microbiome.

How Does Your Gut Microbiome Keep You Healthy? 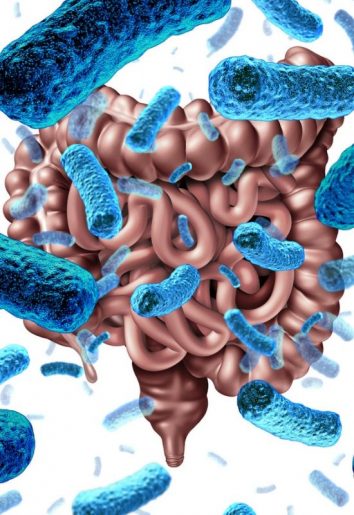 In general terms, the more diverse your gut microbiome, the better your health. Research has found that infants with a limited gut microbiome are more likely to develop allergies to peanuts and dairy products. As we expose ourselves to new microbes through a diverse diet and new environments, our gut microbiomes will grow accordingly. Here are just a few benefits of a diverse gut microbiome:

Obesity is becoming more and more common, but research conducted at Cornell University in New York and King’s College in London, England has revealed that a specific type of bacteria may affect weight management. Christensenellaceae minuta was commonly found among mice with low body weights. By introducing the bacteria to overweight mice, researchers found that the bacteria may also promote weight loss. Researchers suspect this is just one type of bacteria responsible for helping people maintain ideal body mass.

While there are many types of bacteria in the gut microbiome that are helpful, there are also harmful types of bacteria present. For instance, a 2013 study linked Helicobacter pylori to stomach cancer. It may also be responsible for causing duodenal ulcers. It’s suspected that a grouping of different types of bacteria work together to cause colorectal cancer. Some gut bacteria is beneficial in helping the body process cancer treatments, so the news isn’t all bad. Studies of cancer patients revealed chemotherapy and other types of cancer treatments worked more efficiently in people with a more diverse gut microbiome.

Research into gut bacteria and autism found a surprising link. Children diagnosed with autism exhibited lower levels of Coprococcus, Veillonellaceae and Prevotella than those children without autism. This suggests a less diverse gut microbiome may play a part in determining whether or not a child develops autism.

As we get older, our gut microbiomes go through changes just like other aspects of our health. As a result, the gut immune response becomes inhibited, opening the door to a variety of gastrointestinal illnesses. However, a study at the Babraham Institute in the United Kingdom has provided new hope that the gut microbiome could possibly be restored to full functionality.

In this study, the research team found that they could boost the diversity and strength of the gut microbiome in older mice by feeding them the fecal matter of younger mice. The experiment produced findings that suggested revitalizing the gut microbiome in this manner could boost metabolism, cognitive function and gut immune responses. Finding that gut bacteria promote healthy aging has given the researchers hope that the research could lead to a treatment for alleviating age-related conditions.

As people age, their immune system reaches its weakest point since birth. This is the result of a combination of factors. In addition to changes in one’s diet, exposure to medications and antibiotics cause alterations in the gut microbiome. By weakening the microbiome, the gut immune response is also inhibited. These findings raise the question of whether or not the process can be reversed.

A study at Queen Mary University of London looked at how the Caenorhabditis elegans worm reacted to this process. The lifespan, stress, fertility and growth of the worm was examined as it was exposed to 4,000 bacterial genes. They found that they could affect the health of the worm by deleting or removing certain types of bacteria. For exampl, they found a reduced risk of tumor growth, while general immunity was enhanced.

The team also found that the worms were helped by administering a diabetes drug called metformin. Previously, the drug has been found helpful in reducing the risks of cancer, but it is now suspected to alleviate age-related conditions. Results of administering the drug to the worms suggested that the degeneration of the gut microbiome could be reversed. In this way, gut immunity could also be improved.

Probiotic supplements may hold the key to benefiting from a fully diverse gut microbiome. Lactobacillus reuteri was administered to mice in a recent study and, as a result, symptoms of autism were greatly alleviated. Additionally, signs of depression and anxiety were similarly helped in the mice that were administered the bacteria. Lactobacillus is the best known series of probiotics and is widely available in high-quality probiotic supplements.

There are many more types of probiotics that can help improve the health of the gut microbiome and strengthen overall immunity. For instance, Prevotella histicola was found to alleviate some of the symptoms of multiple sclerosis. Other probiotics protect against type 2 diabetes, eczema and many other medical conditions. By combining a probiotic supplement with a diverse and healthy diet, it may be possible to maximize the strength and benefits of your own gut microbiome.