You have probably read about the genetic differences between early birds and night owls. For some people, however, “early to bed and early to rise” is actually a disorder. Their ideal sleep hours occur earlier than modern life allows, often leaving them without the quality sleep that they need to get through the day. The good news is that if you find yourself nodding off over afternoon tea, there are ways of pushing back your circadian clock.

Not Just an Early Bird

We are told from a young age that the early bird catches the worm. Indeed, many careers and life paths still favor those who naturally go to bed early and rise with the sun. While night owls are crawling out of bed with bleary eyes, early birds are already awake and raring to go. However, just as with all sleep schedules, extremes can be unhealthy and interfere with your health.

Even the earliest early bird can make it through dinner without falling asleep and even enjoy the occasionally night out. When people have an internal clock that sends them to bed far earlier than even your standard early bird, this is considered Advanced Sleep Phase Disorder.

What Is Advanced Sleep Phase Disorder?

Although we think of our desired bedtime as a lifestyle choice, it is actually deeply embedded in our brains. When our eyes stop sensing light, they send messages to the suprachiasmatic nucleus (SCN) of the hypothalamus, deep in the brain. This area of the brain tells the pineal gland to release melatonin, which primes your body for sleep as well as performing a variety of other important activities. Over months and years, our brains become used to a particular pattern.

For people with Advanced Sleep Phase Disorder, the brain begins releasing melatonin far too early. They are sleepy and ready for bed around 8-9 p.m. and wake around 4 or 5 a.m. This disorder appears to be inherited, with around half of a sufferer’s children also inheriting the disease. Staying awake late into the night, or even past dinner time, is a struggle for people with ASPD. Even if they want to stay awake, their brains are working hard to make their eyes heavy and their bodies ache for a bed. They begin releasing melatonin far earlier than other people and begin making cortisol, the hormone associated with wakefulness, far before dawn. 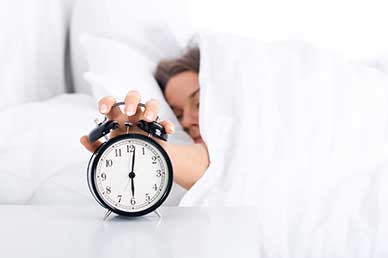 While it is difficult to change one’s innate sleep-wake cycle, the good news is that Advanced Sleep Phase Disorder can be treated. Most doctors recommend a combination of behavioral changes and other therapies. People should go to bed at the same time every night and awake at the same time in the morning, even on weekends or days off. This keeps the body from slipping into a less adaptive rhythm. Because it is almost impossible to change your sleep schedule in one sweeping shift, most experts recommend aiming to stay up a mere fifteen minutes later every night.

In addition, people with Advanced Sleep Phase Disorder can benefit from light therapy during the day and melatonin supplements at night. Light therapy, consisting of exposing yourself to bright lights for a short period of time, sends a message to the brain that now is the time for wakefulness. Melatonin supplements taken in the morning show your body that it is not yet time to wake for the day. Because your body uses these cues to regulate its circadian rhythm, purposely seeking them out can have a huge and beneficial effect on your sleep-wake cycles. Antidepressants may also help many people with ASPD, as they balance out serotonin levels to allow for optimal neurological function.

Why go to all this trouble? Why not simply go to bed early? Unfortunately, for people suffering from ASPD, this can interfere with daily life and lead to getting less sleep overall. Getting the right quantity and quality of sleep is crucial to feeling your best, having enough energy and even to your long-term physical health. The therapies for Advanced Sleep Phase Disorder are inexpensive and have few side effects, so many people find that the effort is worth it in the long run.

If you or a loved one cannot stay awake even until reasonable times, ASPD may be the cause. Luckily, there are ways to correct this disorder so you can get the sleep you need while living a healthy and fulfilling life.