Are you trying to exercise more but are coming up short on “get up and go”? Low levels of a common neurotransmitter may be to blame.

Countless Americans make the New Year’s resolution to exercise more and finally get fit. However, when January 1 rolls around, these would-be fitness gurus often find they are stuck to the couch instead. If this is your own story, you should not feel alone. While over 40 percent of Americans make resolutions at the beginning of a new year, less than 10 percent actually achieve them. New research suggests that low dopamine levels may be the reason so many people find they are too unmotivated to exercise.

Dopamine is a neurotransmitter, i.e. a chemical that is released to send different signals to the brain. It is made from tryptophan, which is an essential amino acid that we get from our diets. Tryptophan is also used to make serotonin and a variety of other essential amino acids, so it is in high demand in the body. While we know a lot about dopamine’s shape and synthesis, this tiny molecule’s method of action was once one of the least understood—and most misunderstoo—neurotransmitters in the human body. Scientists once believed that it was released in reaction to pleasure and reward. Now we know that dopamine is not so simple. Not only does this chemical cause us to feel pleasure, but motivation as well.

People who have high levels of dopamine are motivated enough to work hard for a reward, which in turn causes the release of more dopamine. This creates a positive feedback loop in which people who are used to achieving goals often have the motivation to aim for more positive changes. 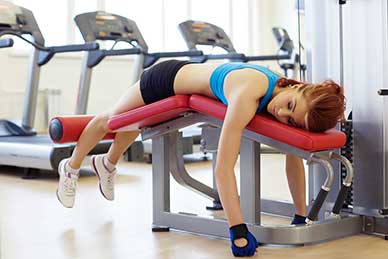 Low dopamine levels can have a variety of negative effects. Defects in dopamine production can lead to Parkinson’s disease as well as serious mental illnesses. However, low dopamine can have less obvious but just as pervasive effects as well. People who have a shortage of this neurotransmitter may suffer from depression and low motivation. When researchers removed the part of the brain that produces dopamine from rats, the rats became extremely inactive and unmotivated.

We tend to think of exercise and other health changes as a matter of willpower. However, willpower appears to be less a matter of personal character and more a matter of brain chemicals. If you are one of the tens of thousands of Americans who made a resolution to get more exercise and promptly broke it, low dopamine may be the reason for your woes. Low dopamine may be behind your lack of motivation to exercise, but there are many safe and natural ways to boost your levels. You can make a few simple changes that increase your dopamine levels and allow you to make the positive life changes you desire.

Are You Unmotivated to Exercise? Here’s How to Get Up and Go!

There are a few ways you can increase your motivation to exercise. First, plan your day so that exercise is easier. Keep your workout bag packed and ready; make sure time to work out is penciled into your busy day. In addition, you should make sure your body has the building blocks for dopamine and other important neurotransmitters so you can get the mental rewards you deserve when you finally make it to the gym or track. Each a diet rich in the amino acid tryptophan, which is present in a variety of foods including poultry and eggs. If you struggle to get enough of this amino acid in your diet, consider taking a supplement that contains tryptophan. You can also talk to a dietitian about whether your diet is providing the building blocks for optimal physical and mental health.

Finally, stop blaming yourself. If you are feeling unmotivated to exercise, the culprit is very likely low neurotransmitter levels rather than personality flaws. Many people struggle to get the motivation that they need to make positive life changes. Once you have begun the journey, your dopamine and serotonin levels will likely increase in response to the positive activity and accomplishment.

Many people make New Year’s resolutions that are completely forgotten by February. However, you don’t have to be part of this statistic. By eating the right amino acids and planning for healthy living to be a part of your overall life, you can overcome the barriers that make you unmotivated to exercise. This year can be the beginning of a healthier, happier life.