Over the past decade, research on gut bacteria has exponentially increased our understanding of how our gut affects us as a whole. So, what exactly is the gut microbiome, how does it form and what is the link to immune response and heart health?

What is the Microbiome?

Each one of us possesses a complex and completely unique ecosystem of microbes that exist on and inside of our bodies, which is collectively referred to as the microbiome. The human body cohabitates in a symbiotic relationship with these trillions of microorganisms, known as the microbiota, that form communities everywhere from on our skin, in our mouths, in the nasal passage and of course, in our gastrointestinal tract. In fact, the largest number of these microorganisms exist within our guts.

These microbes have evolved over hundreds of thousands of years to form this mutually beneficial relationship. They play key roles in core bodily functions such as immune response, vitamin and nutrient production and uptake, brain function and disease resistance. Any imbalance to this delicate relationship can have adverse health effects.

How Does the Microbiome Form?

No two people share the same microbiota composition, and even within our own bodies, the communities of microbes are vastly different between locations. There are many factors that contribute to the makeup of our microbiome. The moment that we arrive in this world, microorganisms begin to make themselves at home. In fact, even the way that we’re born plays a large role in the types of microbes that take up residence. Our microbiome continues to evolve over our lifetime. There are many factors that contribute to the diversity of microbiota within our microbiome, including: 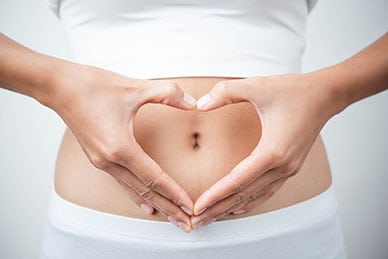 While there has been increasing research on gut bacteria, very little is known about exactly how a microbiome is established and maintained to begin with. Researchers from Caltech recently set out to form a better understanding of just how these microorganisms make themselves at home.

The team’s research, which was led by graduate student Gregory Donaldson, was recently published in the journal Science. The researchers examined a microbe called Bacteroides fragilis that is typically found in abundance in the intestines of humans. Bacteroides fragilis was of particular interest because though multiple strains of the bacteria exist, most people will form a long-term relationship with a single strain.

According to Donaldson, “studies by other labs have shown that most people carry the same strain of B. fragilis throughout their lives. We wanted to understand at a molecular level how these bacteria are able to colonize the gut in a stable, long-term way.”

What the researchers discovered is that the microbiota had the ability to trigger a tailor-made immune response. Bacteroides fragilis makes itself at home deep within the thick mucus that lines the guts close to the surface of the intestines. The bacteria are encased in a protective capsule made of carbohydrates, the type of which is typically associated with pathogens, the bad bacteria, and is not normally found within the mucosal layer.

Typically, these bacterial capsules trigger an immune response in which the body produces antibodies that attempt to eradicate the pathogens. However, in this instance, the team observed that instead of destroying the bacteria, the antibodies that were binding to the Bacteroides fragilis were in fact helping the bacterium to successfully colonize.

“It is surprising to find that an immune response actually helps beneficial bacteria to thrive, which in turn helps the host thrive. The study of immunology has mainly been in the context of pathogenic bacteria. But there are trillions of bacteria in the gut, and most of the time none of them are making you sick. Our study shows that there is active immune recognition of these bacteria, but it helps rather than hinders them. This suggests that the immune system is more than just a defense system and antibodies are more than just weapons,” said Donaldson.

Recent research on gut bacteria and the link to immune response suggests that resetting the gut microbiota composition may have health benefits. Other research has also linked the disruption of the gut flora to improvements in health, particularly cardiovascular health.

Microbes within the gut produce T cells, which are activated by heart failure and are known to progress the disease. These T cells travel to the heart and provoke an immune response which causes inflammation and forms scar tissue. In findings that were presented at the 2018 Experimental Biology conference, Dr. Francisco J. Carrillo-Salinas exhibited that sterilizing the gut decreased the number of available T cells and prevented these detrimental changes from occurring.

“Understanding how the gut microbiota directly regulates the function of distant organs such as the heart will shed new light on potential new therapeutic approaches in patients recently diagnosed with heart failure to prevent progression,” said Dr. Carrillo-Salinas.