You are here:Home / Products / Chelatin® 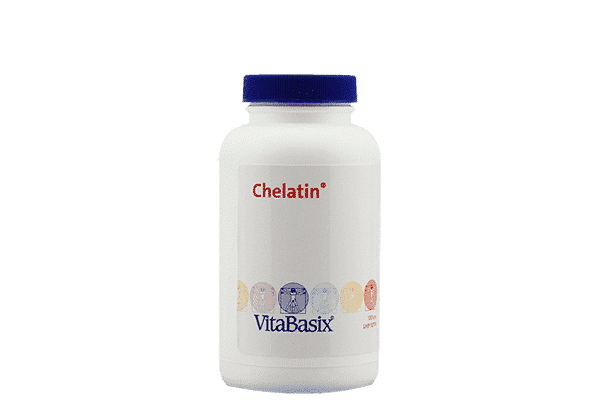 Chelate therapy with EDTA cleanses the body from damaging substances, protects the vascular system and improves the function of all organs.

The older we get the more cholesterol, calcium and other minerals get deposited along the walls of our blood vessels and obstruct them in the course of time. This process, which affects all of us, is called atherosclerosis. Ignoring it may have dangerous consequences as a sufficient oxygen supply of the organs is no longer guaranteed.

Induration and obstruction of the vessels through atherosclerosis affects not only individual sections but the body as a whole. When the coronary vessels are obstructed with plaques (this is the name of these deposits), then also the vessels in the brain, the kidneys, the lungs and all other organs are affected to a similar extent.

What also makes atherosclerosis so dangerous is the fact that it is a «silent» disease which damages the body as a whole and is often only discovered when damage has already been done. Thanks to the chelate therapy with Chelatin®, atherosclerosis can both be treated and also largely prevented.

As has been shown in many studies, the EDTA chelate therapy may successfully remove plaques from the walls of vessels and significantly improve or even normalize the blood flow – often also in far progressed cases. Removal of the plaques allows the blood, which carries oxygen and nutrients, to reach and fill up the body cells. In this way, the optimal function is restored.

The chemical structure of EDTA (ethylene­diaminetetraacetic acid) is that of a weak acid which, together with metal ions, forms so-called chelates, particularly stable complexes of metals with organic compounds. In World War II, already, workers who worked in battery factories or with lead-containing paints and developed symptoms of lead poisoning were given EDTA.

Through the formation of chelate the poisonous lead was removed from the body (through the kidney). But much more surprising was that the therapy resulted in a significant improvement of the symptoms of many workers having cardiovascular diseases.

The mechanism of chelate formation is not yet fully understood and the processes involved are very complex. Simplified one can say that EDTA removes undesired calcium and other minerals conducive to the formation of plaques and eliminates them through the kidney.

Chelate therapy with EDTA has often been compared to a milling machine eating its way through blocked pipes and making them free again. However, this comparison is only partly correct. Milling machines would remove the atherosclerotic plaques but would not be kind to healthy tissue either. A better comparison would be that to a liquid decalcifyer: by repeated adminis­tration the deposits are simply dissolved. In the same way also harmful toxins are removed from the body.

In normal cases take 1 capsule 3 times a day at mealtimes with plenty of fluid.