Can’t seem to fall asleep? New research suggests that a glass of “night milk” may be as effective as common sedatives in promoting sleep.

Next time you have trouble falling or staying asleep, reach for a glass of night milk instead of into your medicine cabinet. To clarify, this beverage isn’t called night milk because you drink it before bedtime; it’s actually cow’s milk that is harvested from the cow in the evening hours. If you’re like the majority of people learning about this new concept, you’re probably wondering why the time the cow is milked makes a difference.

Thanks to a study performed by a Korean research team we have the answers.

The Science Behind Night Milk

Recently, a new animal study that was published in the Journal of Medicinal Food determined that before bed, a mother’s milk takes on an enhanced chemical structure with elevated levels of tryptophan and melatonin.

Authors of the study from Sahmyook University in Seoul, South Korea concluded from this finding that night milk may be a promising natural remedy for anxiety and sleep disturbances.

To test this theory, milk from cows was collected at various times during the day and night. The milk was then put into powder form and fed to groups of mice.

Evaluation of the milk’s effect on both groups revealed that the mice fed night milk were notably less active than the mice that received milk from cows who were milked during the day.

Surprisingly, the mice who were less active were more apt to explore open spaces. Researchers interpreted their attempt to explore as being reflective of reduced anxiety, with effects comparable to the effects of diazepam, a common sedative used to treat anxiety.

However, the effects have yet to be tested on people, though many people have been drinking milk or taking melatonin to successfully fall asleep for years.

New Theory, or Just First of Its Kind Research? 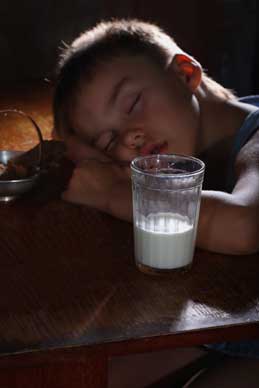 While this is new research, it is not a new concept. A German company patented “nocturnal milk” and produced a powder from milk that had been collected from cows between the hours of 2 a.m. and 4 a.m.

The effectiveness of nocturnal milk can be vouched for by happy consumers like Maike Schnittger, who was able to get through a troublesome period of anxiety by taking the powder that helped her fall asleep within half an hour. She also stated that she fell into a deep sleep and felt really awake the next morning.

Carl Bazil, director of the Epilepsy and Sleep Division of the neurology department at Columbia University, was a little skeptical about the night milk concept. However, he stated that the theory behind it is correct, as melatonin and tryptophan have proven sedative properties and milk is also known to help people fall asleep.

The Effects of Melatonin and Tryptophan on Sleep

Wondering just how the tryptophan- and melatonin-rich milk might work? Studies dating all the way back to the 1970s have suggested that taking between one and 15 grams of tryptophan at bedtime can help people fall asleep. Even smaller doses, as little as 250 milligrams, were found to provide people with increased sleep quality by lengthening the amount of time they spent in the deepest stage of sleep.

Normal sleep is produced by two main biomolecules: the hormone melatonin and the neurotransmitter serotonin. Both of these are made naturally in the body from tryptophan, making tryptophan a valuable supplement for those seeking a better quality of sleep.

Scientists reviewed 15 studies of sleep in healthy adults and noted that the administration of melatonin significantly reduced the amount of time needed to fall asleep, boosted the percentage of time that people were actually asleep while in bed and increased their total sleep duration. This is due to the active role melatonin has in the sleep-wake cycle.

So, does this research warrant replacing conventional sleep aids with a glass of night milk? For some, maybe, if they have access to night milk. Although this is excellent research and a great first step in providing a natural solution for two very common conditions, i.e. anxiety and sleep disturbances, we anticipate that a human study is most likely imminent.