A study conducted at Johns Hopkins University looked at 10 decade’s worth of medical records for more than 6,000 patients to determine how vitamin D was related to instances of interstitial lung disease (ILD). While the group of ILD diseases are rare, they can have devastating effects on people who contract one of these conditions. For that reason, researchers wanted to identify contributing causes that might affect the development of an interstitial lung disease.

In interstitial lung disease, or ILD, inflammation and scarring of the lungs causes a range of medical conditions that inhibit the functioning of the respiratory system. Individuals with ILD often develop irreversible lung damage that worsens over time and can have disabling effects on the individual. Exposure to environmental causes, such as coal dust or asbestos, and internal factors, such as the development of autoimmune diseases and infections, can trigger the more than 200,000 annual cases. Once diagnosed, these patients typically don’t survive for more than five years.

The Johns Hopkins study, which was published in the June 19 edition of Journal of Nutrition, found that low vitamin D levels may play a role in ILD. More research is needed to determine if a vitamin D deficiency causes ILD or simply makes one more susceptible to developing an interstitial lung disease. Erin Michos, M.D., M.H.S., who works at Johns Hopkins as an associate professor of medicine, says there was also evidence to suggest illnesses like COPD and asthma may also be affected by vitamin D levels. Part of the reason for this may be related to the anti-inflammatory effects that the nutrient has on the body. Additionally, vitamin D helps regulate the immune system, which interstitial lung diseases throw into chaos. Researchers hope to continue their work to learn how vitamin D supplements, increased sun exposure and ingesting other natural sources of vitamin D play a part in preventing ILD.

In the Netherlands, another study conducted jointly by researchers at VU University Medical Center and Leiden University Medical Center examined how vitamin D deficiencies affected obesity. They looked at the different types of fat located in various parts of the body to see how vitamin D levels influenced weight gain. In addition to total body fat, the research team, led by Rachida Rafiq, focused on belly fat, fat accumulation around the body’s organs, and liver fat. 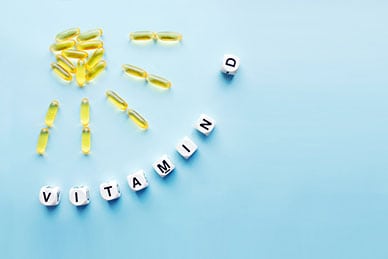 As a part of the study, the researchers isolated incidences of alcohol consumption, chronic diseases and the variations of physical activity in each subject. Once results were adjusted for these variables, the study revealed that women with low vitamin D levels had higher instances of total body fat and belly fat. Conversely, men experiencing low levels of vitamin D more often developed higher instances of liver fat and abdominal fat. It was concluded that the existence of belly fat, or abdominal fat, was directly related to lower vitamin D levels in the blood. Rachida Rafiq added that the results of the study indicates that obese individuals should keep an eye on their vitamin D levels and do what they can to increase them.

If the link between vitamin D and lung disease tells us anything, it’s that everyone needs to ensure that they’re getting enough of the nutrient. Even if you’re not an obese individual, deficient vitamin D levels can lead to a range of illnesses, such as interstitial lung disease. There may be links to other diseases, which researchers have yet to discover.

Although vitamin D is most prominently found in the sun’s rays, the risks of skin cancer may keep you from exploring that source too frequently. Instead, wild caught fish provide the second best source of vitamin D. In a 3 ounce salmon, you can benefit from a total of 425 IU of vitamin D, while a mackerel of the same size provides 547 IU. Another good source of vitamin D is beef or calf liver, which contains about 42 IU in each 3 oz. serving.

There are many more sources of vitamin D that can help you add the nutrient to your system naturally. Egg yolks, canned fish, such as tuna and sardines and shiitake mushrooms are also good ways to introduce more vitamin D into your system. You can also add more dairy products to your diet, including low-fat milk, almond milk, and yogurt.

While adding more vitamin D to your diet or taking supplements can’t guarantee you won’t be affected by ILD or obesity, ensuring you get enough is important to your overall health. By keeping an eye on the vitamin D levels in your body, you can ensure your body is getting what it needs to remain healthy. This can help you reduce the risk of developing many diseases by strengthening your immune system and reducing internal inflammation.