Selenium is a non-metal chemical element that the human body requires in very small amounts.  There are 13 to 20 milligrams of this mineral present in your body at any given moment. Selenium plays a role in immune health, reproductive health, DNA synthesis, thyroid hormones and more. The most notable food sources of selenium include Brazil nuts, mushrooms and organ meats. It’s also present in smaller amounts in other animal products and grain. However, the selenium content of food can vary widely depending on the food’s geographical origin, as some soils have a higher selenium content than others.

It’s important to get enough selenium. Adults over the age of 14 should get 55 micrograms daily. Pregnant women should get 60 micrograms of selenium daily,and lactating women should get 70. Taking a dietary supplement containing this nutrient can have health benefits, especially if you’re at risk for low selenium. You might be at risk for low selenium if you’re undergoing long-term hemodialysis, smoke cigarettes, drink alcohol, take birth control pills, or have a medical condition that causes malabsorption (such as Crohn’s disease, Celiac disease, ulcerative colitis, or HIV). New research indicates that there is a direct link between selenium deficiency and liver cancer.

The Link Between Selenium Deficiency and Liver Cancer

One of the most recently-discovered health benefits of selenium is that having enough in your body may help protect against liver cancer. Previous studies have already proven the antioxidant properties of selenium, which is amplified when selenium is combined with vitamin E. Possessing antioxidant properties means that this nutrient helps to protect against cell damage caused by uncharged molecules known as free radicals, which is a type of cell damage well-associated with the development of cancer.

A new study published in the American Journal of Clinical Nutrition suggests that there is a relationship between selenium deficiency and liver cancer risk. These findings also extended to other biliary tract cancers, including cancers of the pancreas, gallbladder and bile ducts. According to the American Cancer Society, more than 21,000 Americans die from these cancers every year.

In the study, researchers analyzed data from about 477,000 adults over a period of a decade. Over 260 of these people developed liver cancer and other biliary tract cancers over this time span. It was found that the people who developed these types of cancer had significantly lower levels of selenium than everyone else. Compared to those with the highest selenium levels, people in the study with the lowest selenium levels were up to 10 times more likely to develop liver cancer. 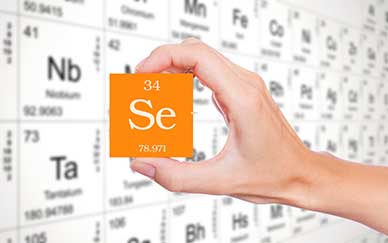 Having low selenium levels not only increases your risk of liver cancer, but it also increases your risk of death by any type of cancer. Scientists have also observed that selenium-rich geographical regions have lower cancer rates on average. Not very much research has been done yet on specific cancers as they relate to selenium intake. One study done in the Netherlands found that men with higher selenium levels have a lower risk of prostate cancer. Two studies to date also suggest that consuming lots of selenium can help protect against colorectal cancer.

Besides the link between selenium deficiency and liver cancer, getting enough selenium has many other health benefits. Selenium is needed for optimal reproductive health, as it contributes to sperm motility. If a man isn’t getting enough selenium, he may suffer from infertility. Selenium is also important for women’s reproductive health. There have been studies that showed that low selenium levels can decrease female fertility, affect fetal growth and possibly cause miscarriage.

Another one of the most notable health benefits of selenium is its benefits for cardiovascular health. Low selenium levels are common among heart attack patients, and severe selenium deficiency can cause heart failure. Another benefit that selenium has for heart health is that when combined with vitamin E and beta-carotene, it can help normalize cholesterol levels.

Selenium is also needed by the thyroid gland. The element is present in enzymes that activate and deactivate the various thyroid hormones. Therefore, getting enough of this nutrient is important for proper thyroid function. Studies have shown that taking a selenium supplement reduces inflammation in those with autoimmune thyroiditis as well as Hashimoto’s thyroiditis.

Finally, studies have found that selenium levels decline as you get older. Low selenium can contribute to cognitive decline in seniors, as shown by a considerably large study that looked at nearly 1,400 people over a period of nine years. It is believed that this effect is due to the fact that selenium reduces oxidative stress (cell damage caused by free radicals), a factor that contributes to cognitive decline.