Research on the link between gut bacteria and IBD suggest that a well-balanced intestinal microbiome may be crucial to treating this disease.

An increasing amount of research about the importance of the gut microbiome has flooded science newspapers and journals. We have linked the bacteria that live in our gastrointestinal tracts to digestive health, diabetes risk and even to mental health and mood. The latest research on gut bacteria and IBD suggest that a healthy range of gastrointestinal flora may actually help people with inflammatory bowel diseases (IBD) such as Crohn’s disease and ulcerative colitis.

What Is Inflammatory Bowel Disease (IBD)?

Inflammatory bowel disease, or IBD, is not a single disorder but rather a group of several different diseases. All types of IBD cause inflammation of the gastrointestinal tract. This category includes Crohn’s disease as well as many different types of chronic colitis. Although the individual conditions grouped together as IBD differ, they all have several things in common. Inflammation of the gastrointestinal tract leads to diarrhea, poor digestion, poor absorption of nutrients and a variety of other symptoms.

There are currently several treatments for IBD, but these are avoided by many people because of their high rates of side effects. Many of these treatments focus on suppressing the immune system, leaving people more susceptible to infections. Many people attempt to control these conditions with diet and natural remedies, but little is known about what may be effective in the battle against IBD. New studies, however, suggest several natural approaches that may make a difference.

Doctors recommend eating a healthy diet and developing strategies to deal with stress as ways of dealing with IBD. They also suggest consuming foods or supplements that are rich in probiotics. Probiotics, which are foods or supplements containing bacteria that are part of a healthy GI tract, appear to reduce many of the symptoms of some types of IBD such as ulcerative colitis. Research has found that some cases of IBD are linked to high levels of unhealthy bacteria in the GI tract. A probiotic supplement can colonize the gut with good bacteria which then flourish and crowd out bad bacteria.

New knowledge about the link between certain types of bacteria and IBD also may be helpful for identifying different kinds of IBD. These diseases are currently diagnosed with a biopsy, which requires invasive procedures. Soon, however, doctors may be able to diagnose these diseases with a simple test for different levels of unhealthy bacteria.

There are a lot of theories about what the ideal diet for IBD might be. However, until recently, there was no solid proof to support any of the purported foods. However, new research suggests that eating a diet rich in plant fats may calm much of the inflammation underlying inflammatory bowel disease. Researchers fed lab mice with IBD different kinds of diet and tracked their symptoms along with levels of inflammation in their GI tract. A diet with plenty of plant fats such as coconut oil and cocoa butter appears to reduce inflammation along with the symptoms that it causes.

How can plants fat have this beneficial effect? According to this study, they appear to feed beneficial gut bacteria and help them to flourish. Once again, a healthy gut appears to be dependent on having the right balance of flora. 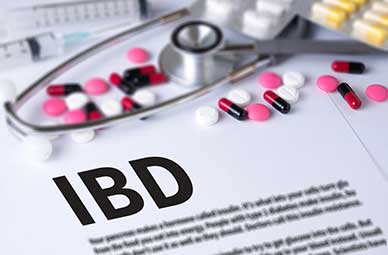 Whether you have IBD or simply have the occasional digestive issue, there is a good chance that you may benefit from a healthier GI tract. People who have healthy digestive systems absorb more nutrition, suffer less cramping and other ill effects and generally lead healthier lives. Because our intestines are responsible for absorbing nutrients and excreting wastes, a lot of medical issues can result when they are out of balance. There are a few ways you can help to support a healthy GI tract, such as:

Although plant oils and probiotics are not part of a traditional Western diet, they are becoming more popular and more accessible every day. Adding these foods to your diet may be just the healthy change that your body needs to more efficiently and painlessly digest foods. A beneficial balance of gut bacteria is increasingly being linked to the health of the entire body, so the effort will likely pay off.