For many people, one of the most feared aspects of aging is the prospect of cognitive decline. Physical disability can be mitigated, but no one wants to live without their memories, personality and ability to navigate life. According to new studies, this gradual decline may begin even earlier than we previously believed—as early as middle age for many women. However, this bad news comes with hope: There are ways to slow or stop mental decline and lead happy fulfilling lives even into our golden years.

What Is Age-Related Cognitive Decline?

Modern medicine has come up with innovative solutions to many of the problems that plague people in old age. The result is that we live longer lives than ever before in human history. However, because people are living longer than ever before, cognitive decline is becoming increasingly common. We can slow the signs of aging in the body but not in the mind. With 72 million elderly people expected to live in the United States alone by 2030, this gradual loss of cognition and memory could be a devastating public health issue in addition to the personal tragedy it is for the elderly and their loved ones.

According to a large-scale study called “The Study of Women’s Health Across the Nation,” this decline may begin even earlier in women than in men. This study found that many women are showing the early signs of cognitive decline as early as middle-age. Women were tested three times over several years after they had completed menopause in areas such as working memory, verbal memory and speed tasks. On average, these women showed a decline in these cognitive skills even though neither they nor those around them realized there was already a loss of cognition. This decline appears to occur earlier in women than in men, perhaps decades earlier. Researchers believe that this may be partially due to menopause when women lose the protective effects of estrogen and other female hormones.

When Do the First Signs of Dementia Begin? 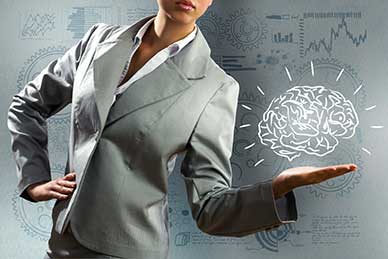 Some people keep their mental faculties throughout old age, while others succumb to Parkinson Disease, Alzheimer’s disease and other devastating types of dementia. Most elderly people end up somewhere between these two extremes, with a condition known as mild cognitive decline. Mild cognitive decline involves small and gradual changes in memory and reasoning skills that occur with aging. People may regularly forget where they placed their keys or forget how to perform a complicated hobby that they once could do well. Most of these people will never develop actual dementia, although they are at higher risk.

This decline is so common that it is generally regarded as a normal by-product of aging. It indeed is normal in that it is common and affects most people. In fact, almost all mammals show similar changes as they grow older. While mild and gradual decline appears to affect women earlier than men, it will likely affect almost all of us at some point, and even affects our dogs, cats and other furry loved ones. This leads many to wonder: Are there ways to stop or even merely slow this decline? How can we ensure that our golden years are indeed golden?

Can Cognitive Decline Be Stopped or Prevented?

According to new research, there are a few natural and healthy ways that we can maintain good memory and cognition throughout our lifespan. First, it is crucial to remain active—both mentally and physically. Getting exercise every day and engaging in mentally stimulating activities both have been proven to keep us healthier for longer times, both in the body and in spirit.

There also appears to be a few dietary changes we can make to encourage good health and cognitive function over a lifetime. Omega-3 fatty acids, which are most commonly found in fish oils, have been found to support brain health and help preserve cognition and memory. Not only are these fatty acids essential building blocks for healthy brain cells, but they also protect against the inflammation that can be destructive to the tissues of our organs over time. Eating a Mediterranean diet with plenty of vegetables, whole grains and lean protein also may slow or prevent different types of dementia. The carotenoid plant compound lutein, which can be found in supplement form or obtained from the diet, has also been linked to healthy cognitive function.

Age-related cognitive decline may be common and occur earlier in women, but this does not mean that we have to accept it. Understanding more about why our bodies lose brain function as we age, and learning how to prevent this, will allow our growing aging population to lead happier and more functional lives. In the meantime, taking antioxidant supplements, eating a healthy diet and staying active in a variety of ways appears to protect you from mild cognitive decline.