Knowing when to drink coffee can have a huge effect on your circadian rhythm and other aspects of health. Surprisingly, early morning isn’t the best time.

People all over the world start their day with a cup of coffee or tea. Not only is this a social and cultural habit, but many feel that a caffeinated beverage helps them to wake up more quickly. However, morning may not be the best time to indulge in a cup of joe. A new study finds that drinking coffee in the hours immediately after waking does not have as much impact on energy as drinking it a little later. In fact, waking up with a cup of coffee may even have negative health effects.

In the time immediately before waking, our cortisol levels rise sharply while hormones associated with sleep decline. This helps us to wake quickly and face the challenges of the morning. Our cortisol levels peak between 8 and 9 a.m. before dropping off dramatically.

How does coffee affect this cycle? Caffeine is a stimulant of the central nervous system, which is how it helps people to wake up and feel more energetic. One of the ways it accomplishes this is by increasing production of cortisol and other glucocorticoids. In other words, coffee in the early morning is merely duplicating what your body is already doing on a biochemical basis. In addition, drinking your coffee when cortisol levels are already peaking can lead to unhealthy levels of cortisol. This can create a great deal of physical and emotional stress. Your body may even develop a tolerance more quickly due to the extremely high cortisol levels, making caffeine a less effective stimulant in the long run.

When to Drink Coffee 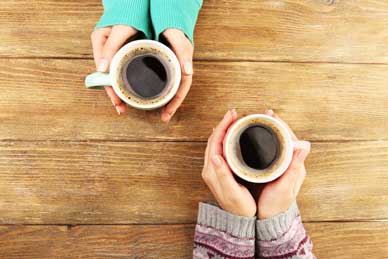 Researchers suggest that instead of having coffee early in the morning, people should wait until 9:30 to 11:30 in the morning. At this time, natural levels of cortisol are beginning to drop, which can increase fatigue and decrease alertness. If you suffer a mid-morning slump, natural changes related to your circadian rhythm may be the reason. Mid-afternoon is another common time for an energy slump, and also a time when caffeine can be very effective. Saving coffee, tea, and other caffeinated beverages for these times will help to perk you up and ensure that you get the most energy at the time when you most need it.

Exceptions to the Rule

Scientists have identified a few exceptions to the general rule that caffeine early in the morning is not helpful. Because circadian rhythms are dependent on light levels, people who wake up long before dawn may benefit from coffee early in the morning, until natural cortisol has taken over. In addition, people who live in areas with very little natural light may not have as strong of a natural cortisol response in the morning and thus can benefit from coffee. However, for the average person, it’s best to save coffee for a mid-morning and/or afternoon coffee break rather than drinking it immediately after waking.

Caffeine can indeed help you to remain more energetic and alert throughout your day, but it is most effective when taken at the right times. If you suffer from morning fatigue, moving your coffee time a few hours later may help you to get the consistent energy you need.