All life under the sun possesses innate timing mechanisms that regulate crucial components for survival. In humans, a small part in the hypothalamus of the brain, the suprachiasmatic nucleus, oversees the individual clocks ticking away in every cell of the body. These biological rhythms dictate everything from cellular regeneration, hormone production and metabolic processes, to heart function, immunity and responses to stress. Right down to a molecular level, our biological lives are largely governed by these circadian rhythms.

Disruptions of circadian patterns are linked to a number of adverse physiological outcomes, such as an increased risk for heart disease, obesity and diabetes, as well as psychological conditions like anxiety, depression, schizophrenia and bipolar and borderline personality disorders. Recent research has also implicated circadian disruption in the onset and aggravation of neurological disorders such as dementia, Alzheimer’s disease and multiple sclerosis. The obvious influence of the body’s circadian clock makes a strong case for rethinking how we approach methods of treatment.

Scientists have observed for some time that the modulation of human gene expression appears to be dependent on the body’s circadian clock, but the body clock’s relevance in therapeutic applications has only recently begun to be appreciated. Research in recent years has demonstrated that circadian rhythms indeed even bear influence on therapeutic treatment outcomes. For instance, studies have found that treatments for everything from allergies and blood pressure to cancer are markedly improved when timed to match the body’s internal clock.

Despite the mounting evidence for its importance, circadian activity is not often given consideration in a clinical setting. One of the main reasons for this is simply a lack of information on the molecular rhythms in humans. Hoping to help fill this data gap, scientists from Cincinnati Children’s Hospital Medical Center (CCHMC) have created a database analyzing genetic circadian rhythms.

The researcher’s efforts provide an invaluable look into numerous rhythmically expressed genes that are involved in the inner workings of drug transport and medication metabolism and further confirm that biological rhythms are key to the equation when considering treatments. The data their findings present should prove to be a useful resource for the budding field of chronopharmacology.

The team’s research efforts are detailed in Science Translational Medicine. 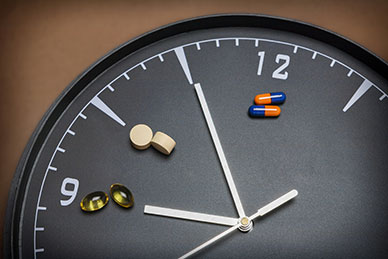 Led by Dr. John Hogenesch, a biologist working in the Human Genetics and Immunobiology divisions at CCHMC, the group of scientists analyzed the data from thousands of tissue samples, which were comprised of 13 varied human tissue types that were collected from 632 donors. Utilizing a new method of analysis, the team constructed a database cataloging circadian patterns in human gene activity in hopes of gleaning insights into the genes regulating how drugs work.

According to the authors, the body clock regulates half of the protein-coding genome in humans. The team report in their article, “[N]early half of protein-coding genes were shown to be cycling in at least 1 of the 13 tissues analyzed. One thousand of these cycling genes encode proteins that either transport or metabolize drugs or are themselves drug targets.”

The researchers believe the discovery to have “clear implications” for circadian medicine. They state, “These results provide a useful resource for studying the role of circadian rhythms in medicine and support the idea that biological time might play a role in determining drug response.”

In a press release, Dr. Hogenesch commented, “we identified rhythms in gene expression across the body in a large and diverse group of people. It doesn’t matter if you’re male, female, young or old, or what your ethnicity is, your body’s internal clock regulates half your genome.” He further explained, “this includes drug metabolizing enzymes, transporters, and targets. Now we are learning which drugs hit clock-regulated products and may benefit from optimizing administration time in people.”

The team stresses that further research, including clinical trials, are needed before their findings can be applied in clinical practice.

Possibly the largest barrier to seeing circadian timing applied in clinical settings is the lack of available data regarding the underlying clock mechanisms in humans. In hopes of helping to bridge the data gap, the team put into use a new algorithmic approach for studying the body’s timing mechanisms in relation to changes in gene activity.

The team used this new bioinformatics algorithm that they developed, referred to as CYCLOPS, which is short for “cyclic by periodic structure,” in order to analyze raw data of the genetic interactions from the donor tissues.

Out of thousands of genes that were found to cycle rhythmically in the different tissue samples, the authors report that it was “core clock genes” that were found to be the “most robust,” a finding which echoes previous studies into the genetic patterns of other vertebrates. Nearly a thousand genes were identified that code for proteins affecting how medications work.

A Strong Influence on Heart Medications

The first author of the study, Dr. Marc Ruben, commented, “overall this connects thousands of different drugs, both approved and experimental, to nearly 1,000 cycling genes. We found that genes that cycle in the human cardiovascular system are targeted by many of these drugs.”

Of those studied, the team reported observing the rhythmic cycling of 136 different medication targets in one of four heart tissue locations — the aorta, atrial chamber, as well as the coronary and tibial arteries. Many of the medication targets observed are considered “standard-of-care” marks for heart disease drugs, in particular, a family of medications referred to as “calcium channel blockers.” Calcium channel blockers are a class of drug that aid vascular relaxation in angina and hypertension patients by reducing the amount of calcium present in the cells of the heart and blood vessels.

The team’s efforts provide a good basis for future research into avenues of individualized treatment, but there are still challenges ahead. Dr. Ruben commented, “it’s not as simple as taking your medication in the morning. One in six US workers are now shift workers, so while it may be morning for most, it is bedtime for some. We need a robust way to measure body time to account for this.”