Cancer is one of the most deadly diseases in the world, killing an estimated 7.6 million people every year. While there is a constant flow of new treatments, the number of deaths nonetheless demands more research and, hopefully, an eventual cure. Many people use all available treatments but still die of this disease. For many, the treatment itself is part of the problem, as chemotherapy side effects can be quite serious. Until there are ways of stopping cancer in its tracks, we may be able to improve outcomes and reduce the tide of deaths by using chronotherapy in cancer treatment.

Every cell in our bodies runs on an internal clock called a circadian rhythm. Chronotherapy is the practice of timing treatments so they are taken at the most effective time of day. Giving medications at the right time can increase efficacy while reducing the actual amount of medication that patients need. For example, if a person who has high blood pressure primarily at night takes their medication before bed, not only will it be more effective, they will also need less medication than if they took it in the morning or another random time of day. This, in turn, reduces side effects, medication interactions and the chances of developing toxicity from high levels of medication.

We do not currently know all of the diseases that respond best to chronotherapy. However, research suggests that allergies, heart disease and a wide range of illnesses may be treated more effectively when treatments are given at specific times. According to new research on chronotherapy in cancer treatment, chemotherapy may be among the growing number of medications where timing is everything.

Chemotherapy aims to kill cancer cells, but unfortunately kills many of the patient’s healthy cells as well. Balancing side effects and toxicity is a major challenge for both doctors and patients. What if there were a way to increase the efficacy of chemotherapy while decreasing side effects and toxicity? It appears that chronotherapy may be the answer.

A recent study found that chemotherapy and other cancer treatments are more effective when timed to coincide with the most active times of the circadian rhythm of cancer cells. In other words, timing the medications to stop growth exactly when the tumor is actively trying to grow. This study did not discover only a small difference in efficacy; the chemotherapy administered at the right time of day was actually twice as effective in treating cancer. The perfect time to give a drug depends on the type of cancer and the type of medication, but there appears to be a perfect time for most cancer drugs. Giving medications at carefully-determined times also reduces side effects and toxicity, which are two major reasons that patients often cannot continue with an otherwise successful treatment.

The Circadian Rhythm of Cancer Cells 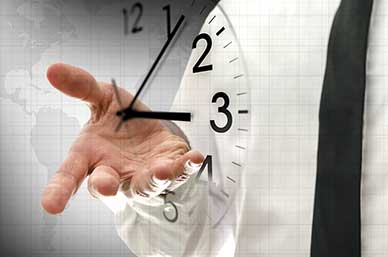 How can timing the administration of a drug make such a difference? Cancer cells tend to have a circadian rhythm that is different from that of healthy cells. They have often lost many of the checkpoints to growth that are present in healthy cells, which means that they can grow almost continuously. While they may grow faster at certain times of day, they are growing or preparing to do so almost constantly. On the other hand, human cells grow only for very small periods of time during the day.

With many types of cancer, it is possible to identify a time when cancer cells are extremely active while normal cells are not. When a drug attacking that part of the cell cycle is administered at these times, it is likely to have a huge impact on cancer while affecting normal cells very little, which means fewer side effects.

Your Circadian Rhythm and Your Health

While most people are not aware of their circadian rhythm, your internal clock plays a huge role in your health. The amount you sleep—or don’t—can affect whether you feel rested but also your risk of developing serious diseases. Because a poorly-regulated circadian rhythm is essential to health, it makes sense that working with your own innate timing would play a role in recovery from serious diseases such as cancer.

If you or a loved one are facing a battle with cancer, chronotherapy may give you an advantage. It’s important to talk to your doctors about the best time to take your medications to maximize treatment and reduce adverse effects.