You are here:Home / Products / Serochron® 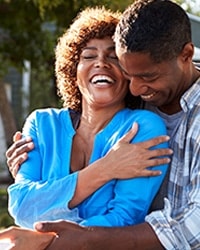 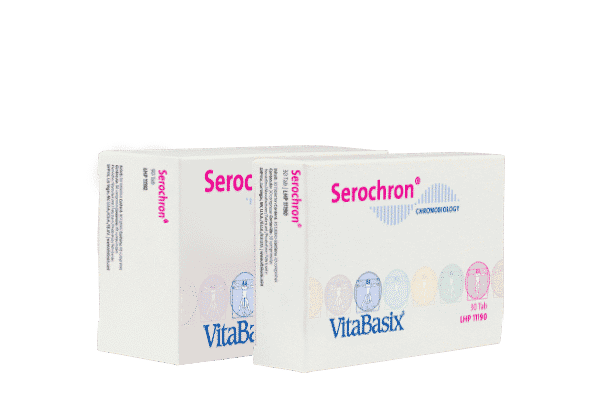 Serochron® is a unique formulation based on the science of chronobiology that helps your body maintain healthy serotonin levels without negative side ­effects. Maintaining healthy levels of serotonin can help promote a healthy mood, ­encourage a healthy appetite and soothe minor tension-related pain.

Approximately one in eight people will suffer from a mood disorder in their lifetime. Those who are affected may experience a range of symptoms, both emotional and physical.

The causes of mood disorders are manifold and complex, and are primarily related to genetic predisposition, certain psychological factors and neurophysiological changes. The latter are marked by changes in the balance of neurotransmitters; messenger substances for the transfer of signals between nerve cells.

Those affected by mood disorders commonly experience a deficiency of neurotransmitters, particularly serotonin, therefore treatments that raise the concentration of this substance are often utilized. Regrettably, many of these treatment options are associated with a wide spectrum of undesirable side effects.

Serochron® is a unique formulation based on the science of chronobiology that helps your body maintain healthy serotonin levels, without negative side effects.

5-hydroxytryptophan (5-HTP®) is formed in the nerve cells from the essential amino acid L-tryptophan. With the help of a special enzyme, 5-HTP® is then transformed into serotonin. Maintaining healthy serotonin levels is necessary to ensure that other important neurotransmitters work together properly in the brain.

Unfortunately, simply supplementing with serotonin will not address less-than-optimal serotonin levels because this substance is unable to cross the blood-brain barrier. Therefore, serotonin precursors like L-tryptophan and 5-HTP® are often used instead. Although both precursors are also present in food, they don’t exist in sufficient quantities to significantly affect serotonin levels.

Supplementing with 5-HTP® alone is a tactic that has been used successfully for a number of years, but 5-HTP® must be taken several times a day in order to achieve the desired physiological effect. Conversely, supplementing with L-tryptophan alone is also not an optimal solution, because when taken in large quantities it is metabolized and degraded in the liver via a process called the kynurenin degradation pathway, as opposed to being transformed into serotonin.

Serochron® is a dietary supplement that combines L-tryptophan, 5-HTP® and vitamins B3 and B6 in a patented formulation that ensures delivery of an optimum supply of both L-tryptophan and 5-HTP®. This unique preparation provides quick-release 5-HTP® along with slow-release L-tryptophan. This combination rapidly facilitates the enzymatic transformation process leading to the formation of serotonin, while at the same time allowing the slow-releasing L-tryptophan to be transformed into 5-HTP® and subsequently serotonin, avoiding the degradation caused by the kynurenin degradation pathway in the liver. The result is that optimum levels of serotonin may be consistently maintained. Vitamins B3 and B6 support these processes by helping to inhibit the kynurenin degradation pathway.

Maintaining a Healthy Mood: A placebo-controlled randomized study demonstrated the excellent efficacy and tolerability of Serochron®. The study also showed Serochron® to be more effective for maintaining a healthy mood than taking regular 5-HTP® or L-tryptophan alone.

Occasional Sleeplessness: Because serotonin can be transformed into melatonin in the body, Serochron® may help ease occasional sleeplessness, especially in younger individuals.

Maintaining Healthy Appetite: Serochron® has been shown to help maintain a healthy appetite, which may support healthy weight maintenance. Serochron® is very well-tolerated and safe, unlike many traditional anorectic agents.

Cardiovascular Health: Aside from helping to soothe anxiety, Serochron®’s ability to maintain healthy adrenaline levels has a direct positive effect on the cardiovascular system.

Depression: 1 tablet in the morning (if necessary 1 additional tablet at noon)

Migraine: 1 tablet in the morning and 1 tablet at noon

Fibromyalgia: 3 tablets distributed over the day

For general enhancement of wellbeing and a balanced mood, 1 tablet should be taken with plenty of fluid daily in the morning.