You are here:Home / Products / Palmetto® 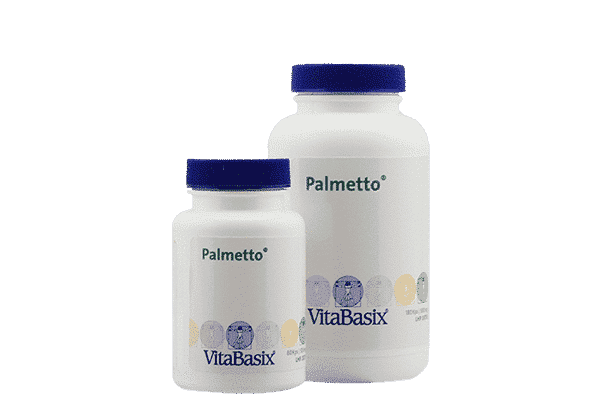 The medicinal plant to treat the symptoms of benign prostatic hypertrophy.

The saw palmetto (Latin: serenoa repens) is a plant native to North America having fan-like serrated leaves and numerous berries. It was used by the natives of North America already many years ago for the treatment of urinary tract diseases in men and diseases of the breast in women.  The North American Indians used the berries as a food and to increase the appetite, but also in case of bed wetting, impotency, low libido and prostatic inflammation. In women they used the natural remedy in case of infertility, painful menstruation and for milk production. After the possibilities of the plant especially regarding the benign prostatic hypertrophy had been realized in Europe as well, a concentrate was obtained from the oily extract of the berries in order to be able to increase the effectivity and to have standardized dosages.

The oil that is obtained from the berries of the saw palmetto consists of a great number of free fatty acids (between 85 and 95 %) and phytosteroles. Among others it also contains the so-called omega 6 fatty acids which, in addition, have a cholesterol-­lowering effect. The fat-soluble extract of the berry can prevent the transformation of testosterones, which are made responsible for the enlargement of the prostate.

More than 20 placebo-controlled double-blind studies showed that the fat-soluble extract of the saw palmetto berries is very effective in reducing the symptoms of a benign prostatic hypertrophy such as nocturia (the most unpleasant symptom of this disease). A study carried out in 1984 with 110 patients suffering from the above-mentioned disease showed that these patients had significantly fewer symptoms over a follow-up examination period of 14.5 to more than 30 months than the control group. This was measured not only by subjective criteria like pain when urinating but predominantly also by objective criteria such as bed wetting during the night, the urinary output and the residual urine. Moreover, the preparation was excellently tolerated and had hardly any side effects.

What is a prostatic hypertrophy? The prostate is a chestnut-size, firm organ that surrounds the base of the male urethra. It secretes a liquid, milky secrete which is added to the seminal fluid and has a triggering effect on the movement of sperms.

In a benign prostatic hypertrophy (pros­tatic adenoma, prostatic hyperplasia), the number of the cells and the glands increases, which then leads to a stenosis of the urethra. The ensuing symptoms are a thin urinary stream, pain when urinating, problems when starting to urinate, nocturia, frequent urge to urinate, problems caused by incomplete emptying, etc.

Prostatic hyperplasia is the most frequent cause of bladder emptying disturbances in men. It is commonly seen between the ages 40 and 50 and takes a slow, intermittent course.

The etiology of this disease is not yet fully known. It is assumed, however, that it is caused by an accumulation of testosterone, the male sexual hormone, or by a redistribution in the hormone balance of the female and male sexual hormones. To find out whether an individual has such a disease, the doctor will make a rectal examination to determine the con­sistency, size and condition, etc. of the prostate. As a next step one can make a so-called uroflowmetry, a determination of the residual urine or an ultrasound examination.

From a therapeutic viewpoint there exist, apart from the operation (adenectomy of the prostate), which is proposed only after all conservative types of therapy have failed, several medical treatments. In Austria and Germany the means of choice for the medical treatment is the oil of the saw palmetto, which not only alleviates the symptoms but also leads to a small yet noticeable decrease of the prostate.