You are here:Home / Products / Ginkozin® 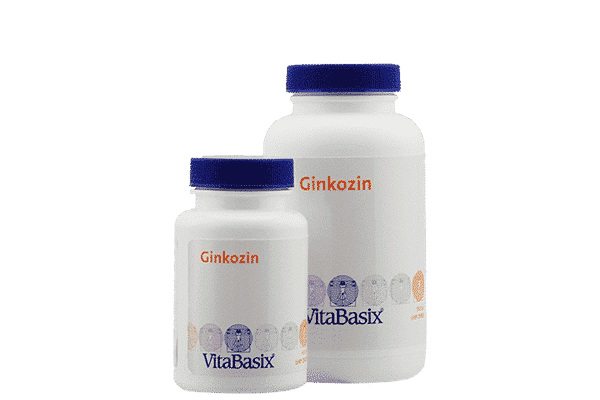 The mix of ginkgo biloba and huperzine A improves mental fitness, increases attention and the ability to concentrate, and also proves to be successful in the treatment of Alzheimer’s disease.

To the same extent to which our society ages, problems with the memory become more frequent. Be it on account of stress or of higher expectations we or others have of ourselves – more and more people become aware of this complex of problems. And rightly so: impaired memory and presenile dementia influence all aspects of life and not only individual persons. The burden is felt by society as a whole. In the United States alone the annual costs are estimated to be approximately 100 billion dollars.

The older people come to be the less active their brain cells become. What was easy once gets increasingly more difficult. It is estimated that the memory of about half of those older than 50 years is impaired, with disturbances ranging from simply forgetting things to the severe forms of Alz­heimer’s disease.

Ginkozin®, a mix of two potent extracts: ginkgo biloba, one of the oldest plants existing on earth, and huperzine A, which is extracted from the moss Huperzia serrata, could prove to be the answer to these problems, though.

Both remedies have been used in China for millennia, and it is mainly huperzine A that in big clinical studies has proven to be very successful in treating disturbed memory and Alzheimer’s disease. Even the renowned medical journal «Journal of the American Medical Association» reported about these investigations.

Ginkgo biloba: ginkgo biloba, an extract from the leaves of the ginkgo tree, which mainly grows in the South and East of the United States and in China, has antioxidative properties and thus protects nerve cells. The active components inhibit the so-called platelet activating factor (PAF), which causes blood platelets to clump. A PAF that is too high damages nerve cells and affects the blood flow to the central nervous system. ginkgo biloba also positively regulates tonus and elasticity of the blood vessels, which in turn leads to a better circulation both in the big vessels and the microvessels.

Huperzine A: huperzine A, an alkaloid from huperzia serrata (a moss which grows in the cool mountain regions of China) has been used in China for millennia to improve memory performance, attention and concentration. The molecular structure of huperzine A (HupA) is well researched. HupA reversibly inhibits acetylcholinesterase (AChE), an enzyme splitting and degrading acetylcholine. Acetylcholine is the messenger substance for the memory functions in the brain and important for our ability to concentrate and be attentive. AChE molecules normally degrade excess acetylcholine and by doing so maintain a balance. In advanced age, under stress and due to toxic influences, however, the acetyl­choline levels go down and the delicate balance is disturbed – deficiency symptoms occur which affect our cognitive abilities.

In normal cases take 1 capsule daily with plenty of fluid.