Omega-3 fatty acids have risen to fame for their proven ability to promote healthy mood, support a healthy heart, improve mental health and reduce system-wide inflammation. However, when it comes to the topic of omega-3 and multiple sclerosis (MS), there has been an ongoing debate among experts. Researchers at Kaiser Permanente Southern California recently set out to examine if an increase in the ingestion of omega-3 fatty acids could reduce the risk of MS. Their findings were promising, suggesting that regular ingestion of omega-3 fatty acids may be linked with a reduced risk of developing MS, but further research is still needed.

Multiple sclerosis is a chronic inflammatory autoimmune disorder that affects the central nervous system and causes neurodegeneration. According to the study author, Dr. Annette Langer-Gould, “Omega-3 PUFAs have been shown to be neuroprotective during aging and suppress MS-related inflammation through multiple mechanisms in cell cultures and animal models. This provides at least two biologically plausible mechanisms whereby higher omega-3 PUFA intake and biosynthesis could protect against development of MS.”

In the recent study, researchers analyzed the diets of 1,153 participants, approximately half of whom were diagnosed with MS or clinically isolated syndrome (CIS). Based on their diet, the participants were categorized as either high-intake or low-intake. High-intake was defined as one to three servings of fish per month plus a daily omega-3 supplement, while low-intake was defined as less than one serving per month with no supplement. 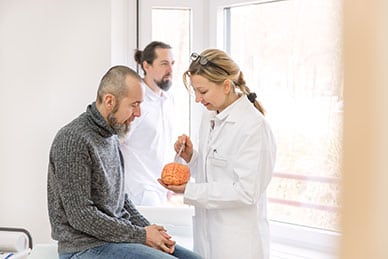 Researchers in the study also looked at genetic variations and found that people better at regulating fatty acids possessed certain variations that were associated with a lowered risk of MS. However, that “does not mean that people with a certain genotype need to eat more fish than others to get the same health benefits,” explained Dr. Langer-Gould. The team hopes to replicate their findings in further studies.

While findings suggest that omega-3 fatty acids may play a role in reducing the risk of MS, Dr. Langer-Gould emphasized that the findings show an association and not necessarily causation. Further research is still needed to confirm their findings and examine all the ways in which omega-3 and multiple sclerosis are linked.

“If our findings are confirmed, it will be important to determine whether the protective effect is mediated by the anti-inflammatory, metabolic, and/or neuroprotective actions of omega-3 fatty acids and whether fish/fish oil consumption could improve MS prognosis,” stated Dr. Langer-Gould.

What Are Omega-3 Fatty Acids?

Counter-intuitive as it may seem, fat is actually an essential nutrient for the body. While bad fats exist, others, like the polyunsaturated fatty acids (PUFAs) found in fish, are actually known to lower cholesterol levels and reduce the risk of heart disease. Your body is unable to synthesize omega-3 fatty acids on its own, and therefore you must obtain them through diet. Fish oil or algae supplements are available in either pill or liquid form and are the richest source of omega-3 fatty acids.

There are three types of omega-3 fatty acids that are essential to human health: ALA, EPA, and DHA.

This plant-based omega-3 can be found in chia, flax, and hemp seeds, walnuts, and leafy greens such as spinach and kale. ALA is a short-chain omega-3, meaning that it must be converted into the longer-chained DHA and EPA for the body to make use of it, an inefficient process that retains very little of the ALA that is consumed.

EPA is obtained by eating oily fish such as cod liver, herring, mackerel, salmon or sardine, fish oils like cod liver and krill oil and various algae, seaweed, and phytoplankton. EPA has been shown to be particularly effective at reducing cellular inflammation.

The most crucial long-chain omega-3, DHA can also be found in the same marine oil sources as EPA. DHA is crucial for the optimal functioning of the central nervous system.

Omega-3 and Multiple Sclerosis: What the Research Says

Beyond the link between omega-3 intake and MS, other fields of research have shown evidence that omega-3 fatty acids can help soothe common comorbidities of MS, such as depression, anxiety and neuropathy. Here are just a few findings that support the use of omega-3 for the prevention and symptom management of MS:

Omega-3s are neuroprotective. Numerous studies have shown statistical evidence for the use of omega-3 as a neuroprotective agent. Neuroprotectants help to prevent cells from becoming damaged, thus slowing the progression of the disease.

Omega-3s reduce neuroinflammation. Research suggests that the anti-inflammatory effects of omega-3 could help reduce the severity of symptoms and neurological damage in patients diagnosed with MS or CIS.

Omega-3s alleviate the symptoms of anxiety and depression. Several studies have put forth evidence that omega-3 fatty acids possess significant antidepressant effects. One study even found omega-3 to be as effective at combatting the symptoms of depression as some prescription medications.