Menopause brings with it a whole new set of health concerns for the aging woman. The impacts of menopause on bone and metabolic health can lead to a loss of bone density, reduced physical ability and weight gain, however, new research on soy and bone strength suggests that soy protein may help to curb some of these negative health effects.

What is Osteoporosis? Are You at Risk?

Our bones are actually living, continuously growing tissues. They are comprised mostly of collagen and calcium phosphate, the combination of which makes the bone material strong and yet flexible so that it is able to withstand stresses. Throughout our lives, old bone is reabsorbed by the skeleton as new bone is formed. As children and teenagers, the rate at which new bone is created far outpaces that which it is removed, resulting in larger and denser bones. Around the age of 30, our bones reach their maximum strength and density, after which point bone reabsorption gradually begins to outpace the rate of new bone formation.

For women in particular, the greatest amount of bone loss tends to occur in the first few years after the onset of menopause and will continue on into the postmenopausal years. It is estimated that, on average, women stand to lose around 20 percent of their bone density after reaching menopause. Osteoporosis develops when either bone resorption is happening too quickly or when bone formation is occurring too slowly. This loss of bone density can result in weak, brittle bones that may easily break. 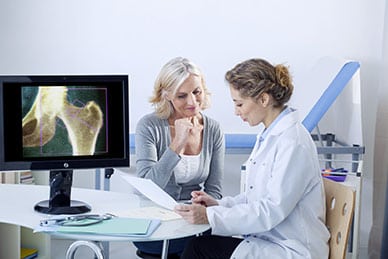 Osteoporosis and bone weakness can affect both men and women, but it is much more prevalent in females. More than 53 million Americans are diagnosed or at high risk of developing osteoporosis. According to the CDC, nearly a quarter of women over the age of 65 live with the disease. Osteoporosis is more likely to develop if peak bone mass was not reached during the developmental years. Postmenopausal women are particularly susceptible due to falling estrogen levels, which can further speed up bone resorption rates. With this in mind, researchers wondered if foods rich in isoflavones, a type of phytoestrogen, may be beneficial to the postmenopausal woman.

For centuries, soy products like miso and tofu have been widely consumed staples of much East Asian cuisine, however, soy foods have not been nearly as popular in a Western diet until recently. An uptick in vegetarian diets and a rise in the amount of research regarding soy’s health benefits has seen an increased adoption of soy into non-Asian diets.

Women facing menopause must contend with a number of disruptive symptoms. Traditionally, most women have opted for hormone therapy to treat the symptoms of menopause, but research has raised questions about the safety of its long-term use. Alarming studies have shown that estrogen plus progestin therapy increases the risk and mortality rates for breast cancer, leaving many to seek out healthier alternatives. Because of the high content of isoflavones present, soy is considered by many to be one such healthful alternative therapy, and the research is starting to agree.

Studies have shown that the estrogen-like compounds in soy may be able to ease hot flashes in menopausal women, and there is evidence to suggest that soy products are good for the heart too. Soy foods, which are low in saturated fats and high in the good polyunsaturated fats, have been shown in clinical trials to lower cholesterol levels, inhibit the progression of atherosclerosis, and help to reduce the risk of coronary heart disease. It has even previously been suggested that isoflavones, such as those present in soy, could hold the potential of slowing bone loss, but until now, the research has been largely inconclusive.

Scientists from the University of Missouri recently set out to investigate how dietary changes — the addition of soy protein in particular — could affect bone health. Their findings have recently been published in the journal Bone Reports. In an animal model, the researchers examined the effects of soy proteins versus a corn-based diet on rats which were bred to have lower than average fitness levels. In order to mimic the hormonal changes of menopause, the ovaries of half of the rats were removed.

“Prior research has shown that these rats are good models, as average American women are relatively inactive both before, and especially after, menopause. As such, understanding how dietary protein sources, such as soy, can impact metabolism and bone health in these rats can help us better understand how such diets might impact women’s health across the lifespan,” explained co-author Victoria Vieira-Potter, an associate professor of nutrition and exercise physiology at the University of Missouri, in a press release.

The rats were fed two distinct diets, one soy-based and the other corn-based, which were comprised of the same amount of calories. The researchers then compared the impacts of the soy-based diet on the rats’ bone strength and metabolic health with those of the rats which were fed a corn-based, completely soy-free diet. The team analyzed blood samples, bone density and strength and also studied the body composition of the rats using EchoMRI technology, which is a method of imaging that is used to obtain accurate measurements of body fat and water mass in living creatures.

Their analysis revealed that soy seemed to be beneficial across the board. “Bottom line, this study showed that women might improve bone strength by adding some soy-based whole foods to their diet,” said the study’s leading co-author, Professor Pamela Hinton.

The team found that regardless of whether the rats still possessed their ovaries, the tibia bones of the soy-fed rats were stronger when they were compared to the rats who were part of the corn diet group. Furthermore, the researchers found that a soy-based diet also improved the metabolic health in all rats, whether they were with or without their ovaries.

“The findings suggest that all women might see improved bone strength by adding some soy-based whole foods, such as tofu and soy milk, to their diet. We also believe that soy-based diets can improve metabolic function for postmenopausal women,” said Hinton

The researchers believe their data to suggest that all women, whether premenopausal or postmenopausal, would find benefit in consuming even small amounts of soy from sources such as bean sprouts, soy milk, edamame and tofu. “Our findings suggest that women don’t even need to eat as much soy as is found in typical Asian diets, but adding some tofu or other soy, for example foods found in vegetarian diets, could help strengthen bones,” Hinton concluded.