Rates of autoimmune diseases are increasing in the developed world. These diseases, which include diverse illnesses such as lupus, rheumatoid arthritis, multiple sclerosis and Crohn’s disease, can be devastating to one’s health, even causing lifelong disability or death. There are many theories about why these illnesses are increasing in prevalence. According to several new studies on gut bacteria and autoimmune disease, our internal microbiome may play an important role.

Autoimmune diseases are a broad class of illness that can attack any organ in the human body. Although these diseases and their effects can vary widely, all have one key thing in common. These diseases result when our immune systems begin to see our own tissues and cells as a foreign invaders and attack them. Most people notice that the effects come in flares with periods of remission.

There are several new medications for autoimmune diseases that can help calm the immune system to extend the length of time that people are in remission. However, most people using these medications still suffer symptoms of their disease, as well as side effects from medication. In addition, suppressing the immune system leaves people at risk of developing infections.

The best treatment for autoimmune diseases, as with almost all disease, is prevention. According to several new studies, maintaining a healthy GI tract may be part of the puzzle.

Mice also can develop autoimmune diseases similar to those of humans, making them an ideal research animal. Researchers infected mice with a common bacteria found in less balanced GI tracts of humans. This bacteria actually traveled out of the intestine and into the bloodstream, where it caused autoimmune inflammation in a variety of organ systems. Most notably, it caused inflammation in lymphoid tissue, which is where key components of our immune systems develop and mature. A sizable proportion of mice in this study developed autoimmune diseases after this.

Can this bacteria produce the same effects in humans? Although it is more ethically complicated to experiment on humans, there appear to be several links. This exact bacteria has been found in the liver of humans that suffer autoimmune disease. In addition, studies on human cells raised in labs show that it causes inflammation in our cells that is similar to that seen in mice.

Could the Right Bacteria Treat Lupus? 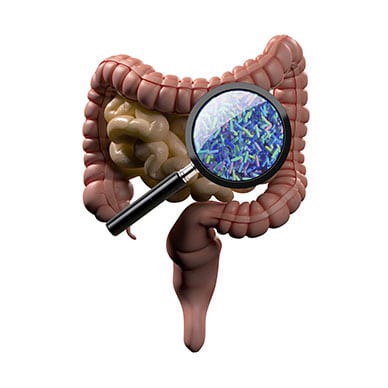 While some bacteria appear to cause autoimmune diseases, others have exactly the opposite effect. In another study, scientists noted that mice with lupus had lower levels of Lactobacillus, a healthy gut bacteria found in yogurt and other fermented foods. In addition, keeping healthy levels of Lactobacillus appeared to reduce the severity of symptoms in mice with this disease. Lactobacillus, a bacteria found in most probiotic foods and supplements, may soon be used to help people with autoimmune diseases to safely reduce the effects of their illness.

Intestinal Flora and Your Immune System

Although we do not currently understand how different bacteria can interact with the immune system, one thing is clear, maintaining a healthy microbiome is important to keeping a healthy immune system as well as good whole body health. Having the right balance of gut bacteria can not just prevent autoimmune illness, but prevent serious infections as well. It also has been found to contribute to good mental health, cardiovascular health and to help maintain good health in a variety of ways.

However, this may not be good news for many modern people. The contemporary Western diet is far from ideal in many ways, but especially so in its effects on GI bacteria. Our prepared and processed foods lack not just healthy bacteria, but also the types of fiber that help to feed and sustain them.

Because our diets do not generally support a healthy GI tract, most modern people need to actively seek out foods that keep our microbiome well-balanced. Experts recommend taking a probiotic supplement or choosing foods high in healthy bacteria such as yogurt. In addition, it is best to combine these foods with soluble fiber, also known as prebiotics. Prebiotic supplements contain the types of fiber that “fertilize” healthy gut bacteria much like we fertilize a garden, providing the foods and nutrients that they need to thrive. In addition, it is important to avoid antibiotics unless they are necessary for our health, both in medical care and in the products that we use to clean our homes.

Could the rise of modern chronic diseases be partially due to our sanitized diets and lives? Although we do not understand all of the ways that our microbiome can interact with our immune systems, research suggests there is a definite connection. Maintaining the right balance of gut bacteria appears to be one of the most important, and easiest, things we can do to stay healthy.