A lot has been written lately about the health benefits of curcumin. Although many people enjoy this spice for its distinctive flavor, it appears to have even more to offer. In fact, it appears to have a variety of positive effects on health. According to several studies on curcumin and the benefits to the brain, it may even help to protect our brains from disease while helping us to feel better on a daily basis.

Curcumin is a compound found in turmeric that gives turmeric powder its distinctive yellow color and spicy taste. Although it is best known for its place in Indian food, particularly yellow curries, it also is used in Latin food and a variety of spicy cuisines. Although it is a flavor loved by many people, some people dislike both curcumin and spicy foods. While these people may feel they are not missing out on any cuisine, they may in fact be missing out on some very important health benefits, as curcumin appears to be a healthy choice in a wide variety of ways.

Could a Curry Be Good For Your Health?

Many cultures have used turmeric root as a traditional home remedy for a variety of medical conditions, from infections to pain, and new research is suggesting that this spice may indeed have a variety of medical uses. Curcumin in particular has been found to possess powerful anti-oxidant and anti-inflammatory properites, both of which encourage health by fighting the underlying causes of many diseases.

As early as 2010, researchers noted that curcumin was effective in supporting healthy cell growth in several different cancers, including cancers of the head, neck, prostate and colon. It was also found to sooth minor pain and inflammation associated with osteoarthritis and tendinitis. However, the real benefits of this compound may lie in its effects on the brain. 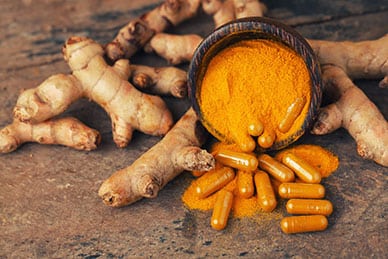 Researchers began studying curcumin’s effects on the brain after noting that Alzheimer’s disease is significantly less common in India, where people consume turmeric as part of their traditional daily diet. They found that curcumin appears to have neuroprotective effects, encouraging the repair and regrowth of brain tissues. Later studies on rats found that curcumin’s effects on brain regeneration can be seen not just in Alzheimer’s disease, but in stroke as well. In fact, it promotes the growth of new brain tissue by around 80 percent.

However, even younger people may be able to enjoy benefits from taking a supplement that contains curcumin. According to new research this year, people who take a curcumin supplement score higher on tests of memory. In addition, this spice appears to support healthy mood, performing as well as several prescription antidepressants in clinical trials.

Researchers are currently performing more studies to find out exactly how curcumin can have such a wide range of positive effects. Its proven role as an anti-oxidant and anti-inflammatory likely contribute, but there may also be special factors unique to this compound. We still do not understand completely how this compound interacts with our cells. Because there are no serious side effects associated with curcumin, a growing number of people are beginning to take supplements that contain this ingredient.

Nutrition as Medicine: Eating Your Way to Good Health

Can you really lower disease risk, improve your memory and feel better simply by eating curry? The recommendations are mixed. Most experts do not feel that the turmeric in your spice cabinet contains enough bioavailable curcumin to make a measurable difference. However, people in India who routinely eat turmeric on a daily basis have around one-tenth the Alzheimer’s risk of Americans. Clearly, eating turmeric can make a difference if you eat enough of it.

Diet and nutrition appear to have a greater impact on our general health than we previously realized. The Western diet in particular appears to fall short
when it comes to promoting good health and preventing disease. However, the wide availability of foods from other countries along with the range of supplements on the market have made it so we all can enjoy the health benefits of a balanced diet even when our lifestyle choices fall a bit short.

Most people in the West do not eat spicy curries every day. We still can enjoy the disease-fighting benefits of turmeric. Although there is no way to guarantee that you will maintain optimal brain health throughout your life span, getting enough curcumin in your daily life just may increase your odds.