From brain function to metabolic function, the mountains of gut bacteria research over the past few years have only just begun to reveal how the trillions of microorganisms that reside in our guts impact our health. Here’s a roundup of some of the most recent research into our gastrointestinal microbiota and its implications on health.

Scientists are working to form a better understanding of how the connection between our gut and brain affects the central nervous system. Previous studies have highlighted the fact that the gut microbiota in patients with multiple sclerosis (MS) differs from the bacteria found in those without multiple sclerosis. Researchers from Brigham and Women’s Hospital have been focusing their efforts on exploring the gut-brain connection to better understand this link to multiple sclerosis. In their most recent work, the Brigham team investigated interactions between gut microbes and two particular types of glial cells, astrocytes and microglia, known to play major roles in the central nervous system.

While other studies in the field have explored how byproducts from the microorganisms living in the gut may cause brain inflammation, the team’s newest study is the first to examine how microbial byproducts may prevent inflammation. In their research, they discovered that when the microbes in the gut process tryptophan, an amino acid that is commonly associated with turkey, they produce compounds that are able to cross the blood-brain barrier and activate an anti-inflammatory pathway that restricts neurodegeneration.

The pathway in question has also been associated with both Alzheimer’s disease and glioblastoma. The team believes their research may be useful in understanding other neurologic conditions outside of multiple sclerosis.

According to Francisco Quintana, Ph.D., Associate Professor of Neurology at Harvard and one of the co-authors of the study, “it is likely the mechanisms we’ve uncovered are relevant for other neurologic diseases in addition to multiple sclerosis. These insights could guide us toward new therapies for MS and other diseases.”

The study has been published in the journal Nature. The team plans to delve deeper into the gut’s connection to neurologic conditions. Their findings may one day help guide future therapies for those suffering from neurologic disorders such as multiple sclerosis and Parkinson’s disease.

“These findings provide a clear understanding of how the gut impacts central nervous system resident cells in the brain. Now that we have an idea of the players involved, we can begin to go after them to develop new therapies,” said Dr. Quintana.

Microorganisms in the Gut Trigger Antitumor Response in the Liver

While other studies suggest that the gastrointestinal microbiota influences immune response to cancer, it has not been understood if or how this occurs in the liver. Liver cancer is one of the topmost causes of cancer-related deaths in the world. According to the American Cancer Society, in 2018 alone, over 40 thousand Americans will be diagnosed, and around 30 thousand will die from some form of liver cancer. In a recent study led by scientists from National Cancer Institute Center for Cancer Research (NCI CCR) and published in the journal Science, researchers sought to better understand the relationship between gut flora, liver cancer and the body’s immune response.

The researchers discovered that when they used an antibiotic cocktail to essentially wipe out the gut microbiota, tumors in the liver were fewer and smaller, and there was a reduction of other cancers spreading to the liver.

According to study lead Tim Greten, M.D., “what we found using different tumor models is that if you treat mice with antibiotics and thereby deplete certain bacteria, you can change the composition of immune cells of the liver, affecting tumor growth in the liver. This is a great example of how what we learn from basic research can give us insight into cancer and possible treatments.” 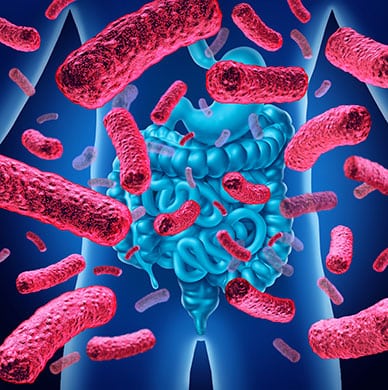 The team investigated the immune cells in the liver to understand the underlying mechanisms behind the tumor suppression. In their research, the team demonstrated that a particular species of bacteria, Clostridium scindens, modified bile acids so that they would signal the liver to produce the CXCL16 chemokine. These signaling proteins stimulate the production of “natural killer T” (NKT) cells, which surveil the liver, reducing the growth of both primary and metastatic liver cancers. The team’s findings provide a better understanding as to the mechanisms that can lead to the development of liver cancer as well as the therapeutic approaches that may be used to treat them.

Obesity is becoming a growing epidemic and is the leading cause of potentially fatal health conditions like heart disease, stroke and some cancers. A new study led by scientists at King’s College London and published in the journal Nature examined just how the gut processes and stores fat throughout the body. Their findings suggest that putting on pounds is the result of diet and environment rather than genetics.

According to lead investigator Dr. Cristina Menni, “this study has really accelerated our understanding of the interplay between what we eat, the way it is processed in the gut, and the development of fat in the body, but also immunity and inflammation. We have been able to get a snapshot of both the health of the body and the complex processes taking place in the gut.”

In order to better understand how the underlying processes that occur in the gut affect fat processing and distribution, researchers analyzed the fecal metabolome in twin pairs. Their analysis revealed that the gut’s chemical processes were impacted more so by environmental factors such as diet than they were influenced by genetics.

“This new knowledge means we can alter the gut environment and confront the challenge of obesity from a new angle that is related to modifiable factors such as diet and the microbes in the gut. This is exciting, because unlike our genes and our innate risk to develop fat around the belly, the gut microbes can be modified with probiotics, with drugs or with high fiber diets,” said the study’s first author, Dr. Jonas Zierer.

Using the derived data, the researchers compiled a cross-reference of which bacteria were linked with what metabolites, creating a valuable resource that will help future researchers better understand how gut bacteria influences health.

Head of the research group, Professor Tim Spector said, “knowing that they are largely controlled by what we eat rather than our genes is great news, and opens up many ways to use food as medicine. In the future, these chemicals could even be used in smart toilets or as smart toilet paper.”