You are here:Home / Products / Serotonic® 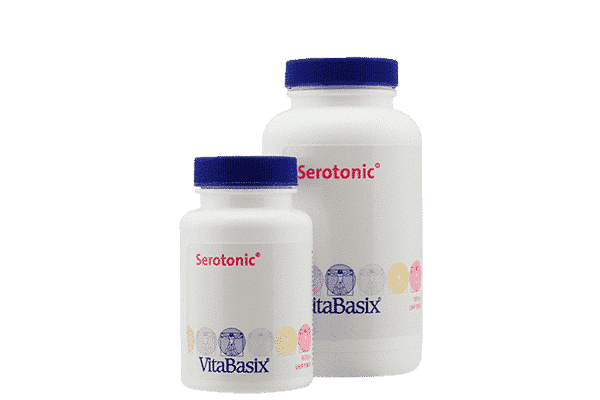 The choice composition of various substances, vitamins and trace elements having an antidepressive effect balances the neurotransmitter level in the brain, and in this way combats anxiety, restlessness and mood swings.

Depression, which is characterized by feelings of hopelessness and unhappiness, has many causes. It may be the reaction to stress, hormonal imbalances, biochemical imbalances and, of course, also to traumatizing events.

Almost everyone has already experienced light depression which quickly goes away. In most of the cases it does not require therapy. However, if the depressive moods become overwhelming and return again and again, they have to be professionally treated by specialists.

In many cases of depression the biochemical-­hormonal processes in the brain are disturbed. Numerous clinical studies have shown that there is a strong connection between depressive disturbances and certain biochemical messenger substances in the brain, the so-called neurotransmitters. If the ratio of these messenger substances as e. g. dopamine, noradrenalin and serotonin is well balanced, a feeling of well-being is experienced.

If this balance is disturbed, e. g. if a deficiency in one of these neurotransmitters (e. g. serotonin) or an overproduction of another (e. g. noradrenalin) develops, one can become melancholic, irritated, fearful, insecure or depressive.

The substances contained in Serotonic® serve to balance the complicated system of the neurotransmitters in the brain and to combat mood swings.

The combination and dosage of the various substances contained in Serotonic® followed the standard values established in numerous studies.

5 HTP® (5-hydroxytryptophan) is transformed in the body into serotonin and is an important substance for the normal brain and nerve functions. Apart from many other functions, serotonin plays an important role in sleep disturbances, mood swings, sensitivity to pain and as an inflammation mediator. Various studies on 5 HTP® suggest that depression, states of anxiety, sleeplessness, migraine and even overweight are just different symptoms of the same illness – a deficiency in the neutrotransmitter serotonin (5 HT).

DLPA® (D,L-phenylalanine) is a mix of the essential amino acid L-phenylalanine and the mirror-symmetrical form D-phenyl­alanine. DLPA® (or the D- or L-form alone) has been used to treat depression for a long time, already, and also as a therapy for chronic pain and Parkinson’s disease.

Phenylalanine is an amino acid which is considered the most important parent substance of various catecholamines (dopamine, adrenalin, noradrenalin). Furthermore, DLPA® is transformed in the brain into phenylethylamine, a messenger substance that occurs naturally in the brain and raises the mood.

St. John’s wort is one of the oldest known remedies for the treatment of depression. Hypericin, the main active ingredient of St. John’s wort, has a brightening effect on the mood, influences the brain metabolism and plays a great role in the transmission of stimuli by the nerves.

More recent studies have shown that the extracts of St. John’s wort develop their antidepressive effects via an inhibition of the reuptake of the neurotransmitters serotonin, noradrenalin and dopamine. Many modern antidepressants also have this mechanism of action, however with frequent side effects.

Vitamin B6 (pyridoxin) is the key vitamin in the synthesis of amino acids and therefore necessary for the formation of proteins and some hormones. Vitamin B6 is also used by the body to produce serotonin, melatonin and dopamine, and influences the production of many further neurotransmitters. Therefore, pyridoxin is an essential part of the food, which plays a major role in the regulation of mental processes and probably also greatly influences the emotional condition. Numerous investigations have shown that people suffering from depression had a significant vitamin B6 deficiency.

Vitamin B3 (niacin) is required to release energy from carbohydrates, in the course of which process also fat is formed. Furthermore, niacin also regulates the cholesterol level. The body produces the required niacin from tryptophane. In case of a vitamin B3 deficiency, the body requires too much tryptophane, which in turn occasions a low serotonin level and may be accompanied by depressive moods.

Calcium is the mineral most frequently found in the body and can amount to up to two percent of the body weight. Apart from its known functions such as the building up of bones and teeth, calcium also participates in the production and release of the neurotransmitters.

Magnesium is required to form bones, proteins and fatty acids as well as for the activation of the B-vitamins, for muscle relaxation and blood coagulation. It is also the basic building block for the formation of ATP – the «fuel», which makes the cells «run». Many hormones also need magnesium for their release.

Furthermore, magnesium is of decisive importance for the regeneration of the cells in the body having the highest energy requirement, and therefore also for the brain cells. People suffering from the chronic fatigue syndrome, a disease characterized by great tiredness, weariness and lack of drive, often had low magnesium levels. If, however, magnesium was administered, the symptoms could often be improved. Also depression frequently go hand in hand with a deficiency in magnesium.

In normal cases take 1 – 4 capsules daily immediately before going to bed with plenty of fluid.