You are here:Home / Products / Seroslim® 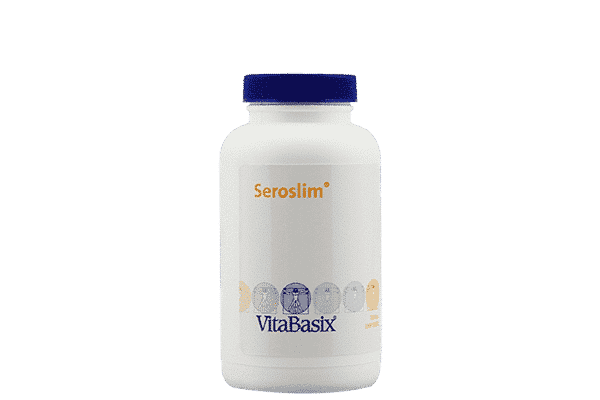 A balanced, low-calorie diet rich in bulkage is the most important precondition for staying healthy. Seroslim® helps to burn access calories and to keep in check the desire for carbohydrates.

Eating the wrong and too much food is the most important reason for overweight and a disturbed lipid and sugar metabolism and also a significant risk factor for diseases of the heart and the blood vessels and consequently many other organs. The reasons for unbalanced eating habits are, however, manifold. Often mental stress, a depressive mood and emotional stress which cannot be worked off and compensated in modern life and lead to chronic stress play a role. A deficiency in vitamins and essential trace substances may also be a reason. Recently, research has particularly focused on the lack of serotonin, which can cause states of anxiety, sleeplessness, depression and attacks of voracity.

Sufficient intake of serotonin or its precursor substance 5 HTP® helps especially in case of the typical craving for sugar and chocolate which – in its extreme form – may lead to bulimia. Particularly when this morbidly excessive hunger is coupled with a depressive state, the administration of 5 HTP® often proves to be successful.

Apart from 5 HTP®, Seroslim® also contains a balanced combination of vegetable substances, vitamins and trace substances which act on various levels against overweight. Plant extracts from the coffee bean (caffeine) and guarana enhance the energy consumption of the organism and help to reduce undesired fat reserves. This boosting of the energy consumption entails an increased demand for vitamins, which are partly (vitamin C, B1, B6) also contained in Seroslim®.

Our nerve cells form serotonin (5 HT = 5-hydroxytryptamine) in a two-step process, beginning with the amino acid tryptophane, which enters the body with the food. In the nerve cells, tryptophane is then converted to 5 HTP® (5-hydroxytryptophan) and furthermore to 5 HT. Studies have shown that the artificial supply of tryptophane or 5 HTP® provably raises the serotonin level, whereby 5 HTP® has the advantage, in contrast to tryptophane, to be also effective in chronic stress. Serotonin itself cannot be administered in considerable quantities via food as it is degraded in the intestines. Serotonin or 5-HT were discovered 50 years ago and only later they were identified as neurotransmitters of the central nervous system.

Serotonin is an important messenger substance in the brain which, among other things, is connected with pleasurable sensations. Its lack, therefore, leads to depressive mood, aggressiveness and listlessness. As the serotonin level in blood rises soon after eating carbohydrate-rich food, the almost addictive craving for something sweet in case of lack of serotonin is quite understandable. Even if the serotonin level is ba­lanced, the administration of tryptophane or 5 HTP® can not only further increase the serotonin level but also balance depressive mood swings and reduce the craving for food. Various medicines, unfortunately also the cholesterol depressors, lower the serotonin level as an undesired side effect. This may also be a reason, apart from the modern living and eating habits, that more and more people require a substitution of serotonin precursor substances.

When the food contains fewer calories, the body automatically lowers its energy consumption. In former times, this was a sensible reaction to states of hunger but nowadays it is an obstacle to a desired reduction in weight. Substances counteracting against this cycle should interfere in the feedback mechanisms of the body and effect an increase in performance and faster burning of the fat reserves by stimulating the adrenaline release.

In this respect the conversion of the storage fat to the so-called «brown» fat has a positive impact as the latter may be mobilized much quicker for the production of energy and heat. This conversion is enhanced by guarana. An increase in efficiency when taking guarana is an additional pleasant «side effect».

Chromium, which is also contained in Seroslim®, helps the body to regulate the blood sugar levels and provably lowers the cholesterol level.

In normal cases take 1 capsule 1 hour before breakfast with plenty of fluid and, as required, increase the dosage up to a maximum of 3 times daily 2 capsules 1 hour before the meals.