You are here:Home / Products / Pregnachron® 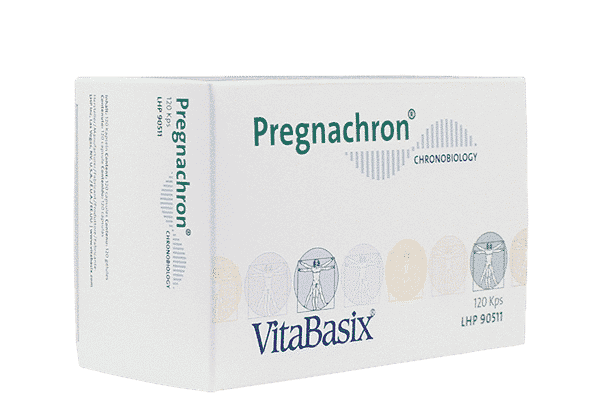 A specially developed food supplement for pregnant women and breast-feeding mothers. The chronobiological composition of all constituents of the morning and the evening capsule ensures optimal supply of all vital substances required in this phase of life, adjusted to the respective time of day.

Pregnancy and the subsequent period of lactation are no disease. On the contrary: it is a phase of highest creativity and the most natural expression of life. Simultaneously, however, pregnancy imposes the greatest challenges on the mother and the life form developing within her. For the mother’s mental health, an environment of love and security is most essential. However, physical needs such as rest and fulfillment of the increased requirement of several minerals, vitamins and important trace elements are a hallmark of this period.

Pregnachron® consists of a balanced combination of important vitamins, minerals and essential trace elements which are needed in greater quantities during pregnancy and breast-feeding because these substances are supplied to the infant’s organism through the maternal organism during this time. Furthermore, states of deficiency might arise during pregnancy or breast-feeding if the diet does not contain sufficient quantities of the substances.

Pregnachron® prevents deficiencies of vitamins and essential trace elements. Such deficiencies are especially dreaded during pregnancy because they might endanger the healthy development of the embryo and, due to the greater need for these substances by the mother and the child during this phase and during breast-feeding, might occur more easily during this time.

The constituents of Pregnachron® are especially adjusted to the requirements of pregnant women and breast-feeding mothers:

Vitamin C (ascorbic acid) is a water-soluble vitamin whose most important function is to protect tissue structures, cell membranes and cell components such as proteins and enzymes from oxidative damage due to free radicals. The risk of this damage is especially pronounced in times of increased metabolism, e. g. during physical strain, acute disease, and also pregnancy.

Vitamin E (tocopherol) serves to protect the body from oxidative stress and eliminate damage that has already occurred. It is a fat-soluble substance and is mainly present in cell membranes. At this site it unfolds its anti-oxidative effect.

Carotinoids are a further class of fat-soluble antioxidants that serve as natural coloring agents in plant-based foodstuffs. The graduated and coordinated action of several antioxidants is needed to protect the body in an optimal way from oxidative damage.

The various substances of the Vitamin B complex serve as important components in several enzymes which initiate key processes in metabolism. States of deficiency mainly occur when the body needs larger quantities of the substance, for instance when the rapidly growing embryonic tissue during pregnancy demands a high turnover of substances.

Vitamin K is needed in the liver for the formation of several coagulation factors. A vitamin K deficiency may cause dangerous hemorrhage in the infant during delivery.

Vitamin D increases the intestinal absorption of calcium and phosphate from food, promotes the mobilization of both of these substances in bone, enhances mineralization, and maintains the required calcium levels in blood by increasing the absorption of calcium from food and minimizing its loss through the kidneys.

The MCHC® contained in Pregnachron® is a most exceptional substance, namely microcrystalline hydroxylapatite. Hydroxyl­apatite forms the foundation of the hard substance of all vertebrates, including humans. It constitutes about 40 % of bone and as much as about 95 % of dental enamel. In addition to calcium and phosphate, which are important substances, it includes all minerals contained in healthy bone substance, in the same ratio. The special microcrystalline form of administration allows optimal absorption of this substance by the body. Thus, states of deficiency in the developing infant, which may lead to ske­letal deformation, are prevented early.

Folic acid is a coenzyme involved in nume­rous metabolic reactions and is essential for optimal functioning of the organism. A folic acid deficiency in the unborn child may lead to pre-term birth or embryonic malformations (neural tube defects).

Like folic acid biotin is a coenzyme involved in several metabolic processes. The need for this co-factor is markedly increased during pregnancy and lactation. Milk, milk products, eggs, various vegetables (tomatoes, spinach, etc.) and fruits (strawberries, bananas, etc.) as well as cereals are good sources of biotin.

Important minerals and trace elements such as magnesium, copper, zinc, iodine, iron, selenium, manganese, chromium, molybdenum and omega 3 fatty acids (docosahexaenoic acid; DHA) are included in Pregnachron®. Particularly the growing infant requires large quantities of these substances. An iodine deficiency, for instance, is one of the most common causes of deve­lopmental disorders in childhood (cretinism) throughout the world. A calcium deficiency may have severe consequences for the child as well as the mother. Magnesium deficiency is a factor involved in complications during pregnancy (eclampsia). The elevated need for iron, which is required for the formation of blood and for optimal supply of oxygen to the child, may disclose a previously concealed iron deficiency. During pregnancy blood is already diluted in a natural way by a high level of fluid retention. Therefore, even a mild iron deficiency may cause anemia, accompanied by general weakness, fatigue and a potential impairment of the child’s growth.