You are here:Home / Products / Neurochron® 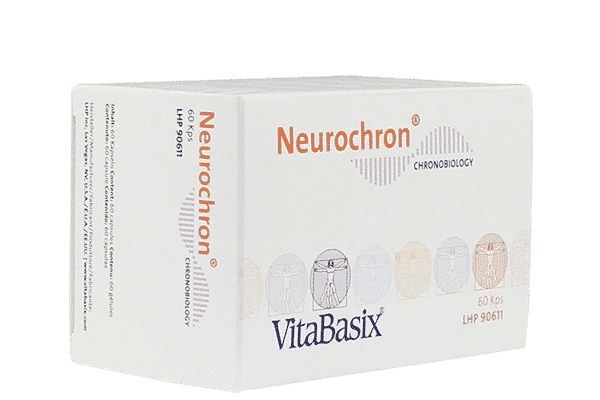 A food supplement based on plant extracts, vitamins and minerals, for the maintenance of mental fitness and enhancement of concentration. The combination of all constituents of the morning and the evening capsule, specifically synchronized to suit the needs of the time of day, allows perfect integration into a person’s everyday diet from a chronobiological point of view. Mental flexibility and high concentration abilities are maintained throughout the day. Age-related changes such as loss of memory can be reduced.

Neurodegenerative diseases are nearly always associated with a slow and insi­dious reduction of mental fitness and loss of memory and concentration abilities. Currently more than two million persons in Germany are massively impaired by reductions in their mental and psychological abilities. Particularly elderly people are affected by this condition. Due to demographic changes this poses new challenges not only in the political and social sectors, but also for the individual who must learn to cope with loss of memory and a general weakening of cognitive abilities, which may even include depression.

Nearly all cognitive disturbances, if not caused by accidents, tumors or other severe underlying diseases, progress very slowly and insidiously, and are therefore difficult to diagnose at the time of onset of the disease. However, early diagnosis would be important to introduce preventive measures successfully so that mental abilities can be maintained up to an advanced age.

To prevent loss of cognitive abilities, in the field of preventive and modern anti-aging medicine a so-called integrated model for the maintenance of cerebral fitness has proven its worth. This consists of a balanced diet, moderate physical training, special exercises to train one’s mental abilities, and specific forms of meditation. If necessary, specific medications and/or hormones may be used under the supervision of a doctor. However, a program of this type should always be accompanied by high-grade food supplementation so that the missing vitamins and minerals are replaced and active substances from plant extracts are administered in order to achieve positive effects on neuronal structures. Furthermore, one must consider the fact that certain substances have a stimulating effect and should be taken during the day while others have a soothing effect and are better administered in the evening. Thus, one achieves optimal results with a food supplementation program based on chronobiological guidelines to maintain mental fitness and prevent age-related loss of memory.

Neurochron® is a combination of vitamins, minerals, antioxidants, phospholipids and selected plant extracts. The division into a morning and an evening capsule ensures, for the first time, a balanced combination of natural substances to improve brain function, in keeping with the most recent scientific findings.

The most important constituents for the day are:

BioPQQ™ pyrroloquinoline quinone disodium salt: The significance of Bio-PQQ™ (also known as pyrroloquinoline quinone) for the human body wasn’t discovered until 2003. This vitamin is involved in more than 20,000 physiological processes and therefore plays an immensely important role in the prevention of many diseases. In addition to the positive effects it has on the general metabolism, muscle function, neuronal conduction and the immune system, it also enhances many effects of the other vitamins.

Vinpocetine: this active substance is obtained from myrtle seeds. In addition to its anti-oxidative properties it promotes blood circulation in the brain as well as oxygen supply, which stimulates cerebral metabolism. Furthermore, it was shown that the ATP content of nerve cells is increased and thus the brain is provided with the energy required for all of its metabolic processes and functions.

Inositol: inositol and its derivatives play an important role in the transfer of signals within the cells. For instance, signals that reach the cell from the outside are directed from the cell membrane into the cell nucleus with the help of inositol. Thus, the meta­bolism of cells is adjusted to external requirements and the cells are stimulated to form specific hormones and other important substances.

Huperzine A inhibits cholinesterase and thus slackens the degeneration of acetylcholine. Furthermore, it prevents depressive moods.

NADH is a substance related to vitamin B3, which is present in all cells and is involved in redox processes. Thus, its most important function is to regulate the energy balance in cells. Reduced levels of this substance were shown to be associated with loss of memory and degenerative symptoms of the brain.

Coenzyme Q10 and vitamin E: both are known to be highly potent antioxidants and act on the cell membrane. Besides, in the respiratory chain coenzyme Q10 serves as an electron transporter in the mitochondrial cell membrane and is therefore essential for the derivation of energy from cells.

The following substances are especially important for the nocturnal activity of the brain:

Vitamin B1 und B2: they protect the nerve cells by trapping free radicals. Furthermore, vitamin B1 improves cerebral blood circulation while B2 has a positive effect on cell respiration – both of these are essential prerequisites to store information in the long-term memory.

Folic acid and ginkgo biloba: folic acid is a coenzyme involved in several metabolic reactions and is therefore absolutely essential for optimal functioning of the organism. It is particularly significant for differen­tiated cell growth and the formation of red blood cells which are responsible for oxygen transport. The flavonoids contained in ginkgo biloba serve as «radical catchers». Ginkgo biloba reduces clumping of blood cells and thus aids in supplying blood to cerebral structures.

Phosphatidyl serine is an essential component of all cell membranes and plays a significant role in the brain, particularly during the release of neurotransmitters and, consequently, in the transmission of impulses between nerve cells. Its relative deficiency in advanced age is a frequent cause of reduced intellectual performance, poor memory and depressive moods.

Panax ginseng: by its anti-inflammatory effect, anti-oxidative potential and ability to stimulate specific brain receptors it has an anti-depressive effect and enhances intellectual performance.