You are here:Home / Products / Melachron® 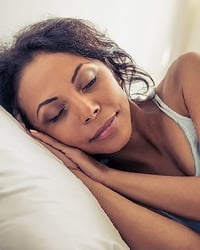 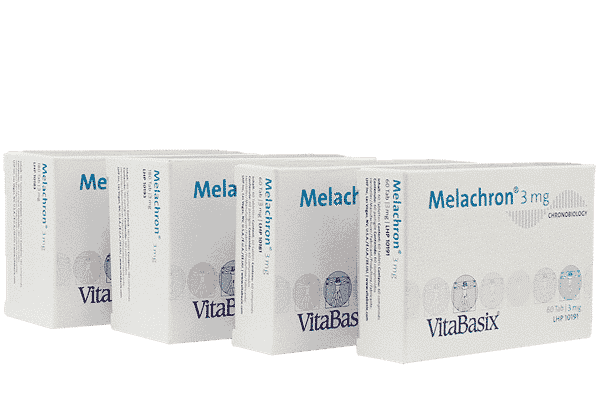 Melachron® is a chronobiology based melatonin formula that helps you ease into a restful sleep and stay asleep naturally, without harmful side effects. Melachron®’s patented, controlled-release formula provides melatonin for six to eight hours, ensuring a restful night's sleep with no morning grogginess.

Melachron® is a specially formulated tablet form of the natural hormone melatonin, which is found in almost all life forms. Melachron®’s patented formula ensures a biologically effective delivery of melatonin for up to six to eight hours.

Melatonin is predominantly produced in the pineal gland. From there, it is released into the bloodstream in a set daily rhythm, «informing» the entire body of the circadian (sleep-wake) phases. Because daylight inhibits melatonin production, melatonin is primarily produced during the night. In addition to the 24-hour circadian rhythm, there also exists an annual rhythm based on the different lighting conditions present throughout the seasons. As a result, in the winter, melatonin is produced and released into the blood over a longer period of time than in the summer. In some species, this is what causes changes in coat color, the onset of hibernation, readiness to mate and more.

Up to three months of age, humans do not have a pronounced day/night rhythm regulated by melatonin. After this, nighttime serum levels of melatonin begin to rise, and the circadian rhythm gradually develops. The highest melatonin concentrations are reached between the first and third years of life, after which production steadily decreases. As a result, older people experience lower nighttime levels of melatonin than younger people, whose melatonin levels typically increase eight- to ten-fold during the night. In older people, nighttime melatonin levels often do not begin to increase until late in the night. Melatonin levels in older adults only reach a maximum of three times the daytime values, and only for a short duration.

This negligible difference between daytime and nighttime levels in older individuals is often not sufficient to accurately convey to the body the shift between day and night, nor to control the internal clock.

The best-researched effect of melatonin is its influence on the sleep-wake cycle.  Maintaining proper melatonin levels helps to minimizes difficulties in falling asleep as well as problems sleeping through the night. Because of its ability to reset the sleep-wake cycle, melatonin can also help with jet lag symptoms: When taken at the correct time while traveling, melatonin can promote a quicker return to a regular sleep-wake cycle. Melatonin is also beneficial for shift workers who, like those suffering from jet lag, frequently suffer from disturbed sleep due to an altered day / night rhythm.

Melatonin has also been shown to exhibit a positive influence on quality of life in the elderly. In all clinical trials so far, higher melatonin levels in the elderly and the resulting sleep changes improved general feelings of well-being and overall health.

Sleep: Melatonin was discovered by Dr. Aaron Lerner in 1958. It has been intensively researched since the early 1980’s, when its regulatory effect on the sleep-wake cycle was discovered and it began to be used to treat jet lag and support a natural sleep-wake cycle. Double-blind studies have shown that not only does melatonin help you fall asleep and improve sleep quality, but in the correct dose and form it also assists in sleeping through the night. In order to achieve both desired effects, it’s crucial that enough melatonin is absorbed by the body at the beginning of the sleep phase (the «falling asleep» phase), and that sufficient melatonin levels are present in the body for the next six to eight hours (the «sleeping through the night» phase).

Melachron® is unlike traditional sleeping pills, which often have powerful side effects and a significant addictive potential. Moreover, certain sleep aids actually suppress the body’s own melatonin production. Melatonin is non-addictive, yet optimizes the natural sleep rhythm. Melatonin also does not produce the morning grogginess that traditional sleep aids can produce.

Most melatonin formulas are either fast-release or slow-release, both of which have drawbacks. Fast-release formulas can help encourage sleep, but because they release melatonin quickly, levels drop too soon and the effect wears off, causing you to wake in the middle of the night. Conversely, with slow-release formulas, melatonin can be released too slowly and levels may peak too late in the night, often resulting in morning grogginess.

Melachron® is the first formula to combine fast- and slow-release melatonin in a patented pulsatile-release delivery process that mimics the body’s natural melatonin-release cycle, helping you to fall asleep quickly and stay asleep all night, with no morning grogginess.

Jet lag: Several trials have shown that melatonin helps reset the shifts in a disturbed sleep-wake cycle that are common during international flights and among swing shift workers. This helps suppress symptoms of jet lag and accelerates the body’s return to a normal sleep-wake cycle.

Melatonin is primarily transformed into 6-hydroxymelatoninsulfate in the liver and is eliminated through the kidneys. Melatonin has a very short half-life of about 30 minutes. After taking Melachron®, approx. 1/3 of the quantity is immediately released, and the remaining 2/3 are released in several small bursts at different times (pulsatile release). This helps the individual to fall asleep quickly as well as ensuring physiological serum concentrations for sleep maintenance for up to six to eight hours. Thereafter, physiological daytime values are achieved about eight hours after melatonin is taken in the evening. 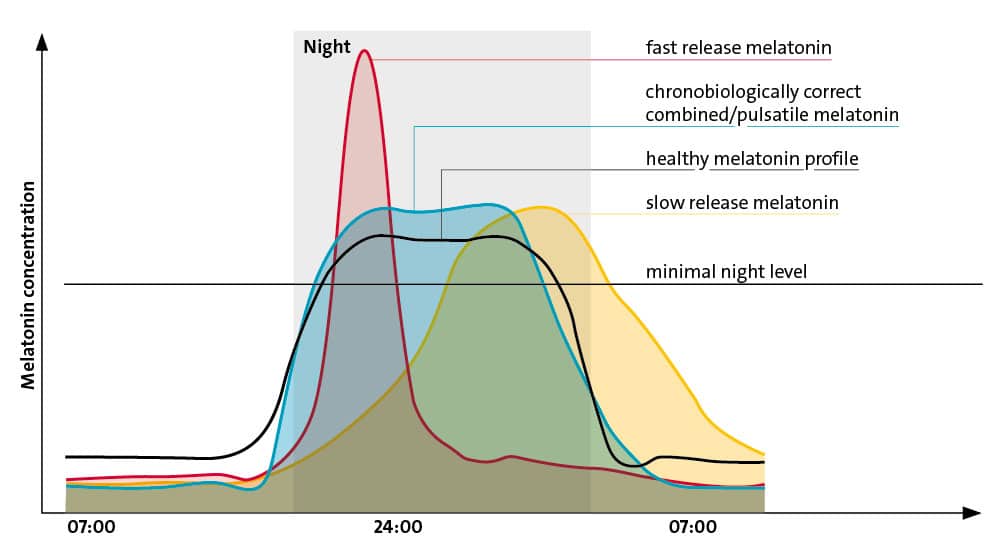 Because of its short half-life of around 30 minutes, Melachron® should be taken immediately before bedtime but always before midnight.

Recommended dosage for trouble falling and staying asleep: 1 tablet per day. Due to the special conditions present in very tense and / or overweight individuals (high adrenaline levels, large body volume), the dosage may have to be increased to 2 – 3 tablets per day to achieve the desired effect.

To stimulate the immune system, improve well-being and support a healthy cardiovascular system:

For shift workers: 1 – 2 tablets daily 30 min prior to desired bedtime