You are here:Home / Products / Liverxin® 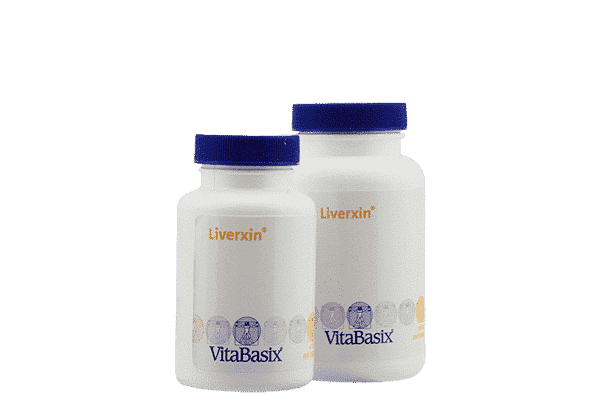 The unique combination of active ingredients of Liverxin® helps the liver to detoxify the organism.

Detoxification of our organism mainly depends on the liver. No other organ comes into daily contact with so many toxic substances. This is why it is no surprise that such a high percentage of the population of Central Europe suffers from hepatic illnesses.

In reality, in this area excessive consumption of alcohol and fatty foods overloads the liver. Then there are a a whole range of other toxins that end up damaging it. Among these, several medicinal products and toxic substances (such as, for example, paracetamol or other chemical products) may favour the development of various forms of hepatic damage.

The ingestion of Liverxin®, a combination of several amino acids including Niacin, Vitamin B12, Choline, Inositol and Cysteine, can block the hepatotoxic effects, as well as improve general liver conditions.

Liverxin® stimulates the metabolism of alcohol. The coenzymes required to contrast the harmful effects of alcohol and of several medicinal products are NADPH and NADH, that play an essential role in the chemical reduction of the relative metabolites. The active ingredients deriving from the unique combination of amino acids, vitamin B12 and Niacin contained in Liverxin® have the advantage of increasing production of NADPH and NADH, therefore reducing the load of acetaldehyde and other toxins on the liver.

Liverxin® accelerates the detoxification process. The Cysteine contained in Liver­xin® essentially has two functions: the first is to form glutathione within the hepatic cells: this is the key substance in the hepatic detoxification process through which the toxic substances and their metabolytes are initially connected and then made harmless. The second main function of Cysteine is to capture lactic acid, a toxic substance distributed throughout the entire metabolism and capable, among other things, of damaging the liver. Through the mixture of Cysteine with lactic acid, pyruvic acid is formed and is subsequently recycled as an intermediate product in the metabolism of sugars.

L-Arginine: involved in several metabolic processes and essential for detoxification from ammonia during the urea cycle. It also strengthens the immune system.

L-Glycine: it contributes towards detoxification of the liver and helps to produce creatine. This amino acid also plays an important role in the metabolism of methionine.

L-Phenylalaline: effective against digoxin poisoning and in the treatment of hepatic illnesses. An essential amino acid for correct operation of the bladder and detoxification of the kidneys.

L-Methionine: efficient for the decomposition of fat in the liver, in the arteries, in the brain, in the heart and in the kidneys. It favours detoxification through the elimination of heavy metals and fats accumulated in the blood, reducing the risk of a heart attack. This amino acid also helps regeneration of the tissues of kidneys and liver.

L-Threonine: thanks to its lipotropic function, in collaboration with aspartic acid and methionine, it prevents the deposit of fat in the liver, favouring the metabolism.

L-Serine: vital for the correct metabolism of fats and fatty acids for muscular growth and for the health of the immune system.

The essential amino acids Leucine, Valine and Isoleucine carry out several vital functions in the human metabolism, especially for the metabolism of proteins in the liver and in the muscular system.

L-Alanine: very important in the metabolic processes of the liver and muscles. In the distribution of glucose, Analine is essential as it provides energy and regulates blood pressure.

L-Asparagine: it contributes to detoxification of the organism and decomposes the cells of alcohol in the kidney. Vital when there is an accumulation of toxins in the body. Asparaginic acid favours the expulsion of ammonia, therefore protecting the liver in this way. In collaboration with other amino acids, it forms the molecules that will bond with the toxins and then be removed by the blood flow.

L-Histidine: it has antioxidant properties and contributes to the elimination of heavy metals by detoxifying the organism as well as improving the absorption of iron.

Glutaminic Acid: it favours detoxification by absorbing the cytotoxin of ammonia. In this way glutamine is created and it can be converted into glucose in the liver, stabilising levels of sugar in the blood.

L-Lysine: it contributes to the construction of collagen and favours the metabolism of fats as well as combating viruses and regulating blood pressure.

L-Proline: consisting of glutamic acid and, just like Lysine, is involved in the production of collagen. Within the cells it acts as a cushion, protecting them from harmful substances.

In normal cases take with plenty of fluid as follows:

In case of excessive fat intake:
2 tablets before and 2 tablets after meals