You are here:Home / Products / Gaba 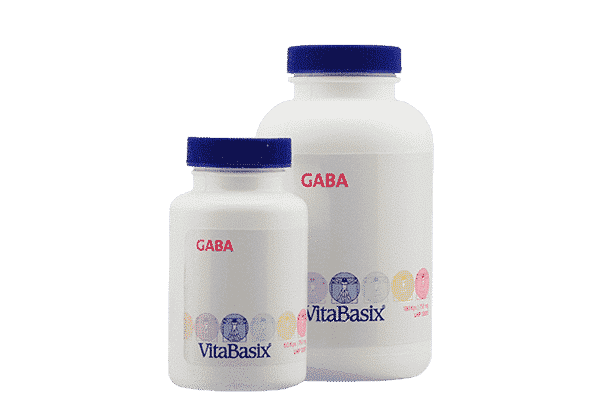 The central inhibitive neurotransmitter as a natural sedative.

We live in a world where we are always subjected to external stimuli. Noise, visual stimuli, computer work and stress are all factors which may easily lead to overstimulation and overstrain. The burn-out syndrome has practically become a wide-spread disease and the sale of psychopharmaceuticals and drugs which make it possible to «come down» has soared in the past few years. It is not uncommon that these problems begin in childhood, already. Child psychologists and pediatricians can tell a tale about that. Ever more frequently the small ones have concentration disturbances so that they cannot be restrained be it at home or at school and have to be treated for hyperactivity syndrome.

The good news is that nature itself has made provisions for such cases and that the human body can produce its own sedative – GABA. Unfortunately, however, the resources are not sufficient in most cases because of the massive overstimulation – and the result is disturbed sleep and disturbed concentration. It gets more and more difficult to relax oneself.

GABA stands for gamma-amino-butyric acid and is a non-essential amino acid which means that it can be produced by the body itself – from another amino acid (glutamine). GABA is the most important inhibiting neurotransmitter of the brain. From a functional point of view this means that GABA inhibits the transmission of signals in the nerve endings and therefore has a very important function as a gate keeper. GABA can be found in about 30 percent of all nerve cells, and inhibition of the synthesis leads to spasmodic fits. Therefore, GABA is the natural «sedative» of the brain.

In old age the GABA levels and the GABA activity drop, which also seems to be the cause of age-related diseases that involve movement disorders and cramps, such as Huntington’s chorea.

Additionally it enhances the release of growth hormone (GH), one of the most important hormones of the body, which is produced in the pituitary gland and released. GH is, among others, important for muscle buildup and also has anti-aging and many disease-preventing properties.

The pharmaceutical industry has, of course, been aware of the sedative effects of GABA for a quite a long time and there exist a number of drugs which intervene in the GABA cycle und imitate the effect. Among them are most of the tranquilizers and soporifics, among others the best known group of the benzodiazepines (whose most prominent representative is valium). Alcohol also docks at the GABA binding sites in the brain, which is the reason for its centrally sedative effect.

In normal cases take as required 2 to a maxi­mum of 6 capsules per day with plenty of fluid.